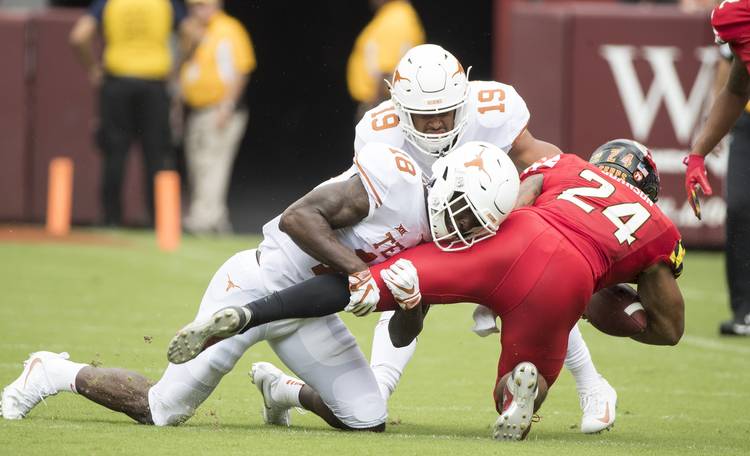 It’s been a tale of two quarters. Today began looking like we’d stepped inside a time machine. But it only looked like the 2017 season opener. The Terps raced out to a 24-7 lead and looked like they were ready to put this one away, but the Longhorns caught fire toward the end of the first half, putting together one touchdown drive  on he strength of their running game, then scoring on a safety and then finishing with a brilliant touchdown catch from Collin Johnson.

So yes, Texas is trailing. But the momentum off that 15-0 spurt to close the first half has things humming at the break.

Besides that Texas scoring spurt, Maryland’s Jeshaun Jones has been the story of this game. The Terps’ true freshman has produced a first-half hat trick — he has run for a 28-yard touchdown, has caught a 65-yard touchdown and has thrown a 20-yard touchdown.

The Longhorns, meanwhile, have been all over the place: Up, down but mostly in between, an undisciplined first two quarters with a couple of big moments but generally marred by sloppy penalties and a lack of execution. It’s easy to forget the missteps because of the big ending to the half, but this first half is looking like a microcosm of 2017: Texas had problems running the ball, Sam Ehlinger missed receivers, there were mindless mistakes and the Terps were treating the defense like they did last September at DKR.

But yeah, there also were two really nice touchdown passes that were topped by even better receptions on those plays by Devin Duvernay and Collin Johnson. And there was the safety. And the running game did offer a glimmer of hope on the second-to-last drive.

Ehlinger’s first pass went to a true freshman — Brennan Eagles. It was thrown behind him and went incomplete. The second pass was a quick out to Lil’Jordan Humphrey, which went for no gain. And so, Texas’ first third down opportunity also went awry — an incompletion to Humphrey, though there was a first down because of a defensive holding penalty on the Terps.

We got looks at each of the top running backs that are in contention to be the running game’s alpha back. No one has flashed. Tre Watson has 7 carries for 35 yards, Keaontay Ingram 6 for 37 and a TD, Daniel Young 3 for 2. Ehlinger is 9 of 15 for 147 yards and 2 TDs, but started out 2 of 6.

First, let’s get the bad stuff out of the way:

We originally had Ryan Bujcevski on that good list — his first punt went for a very Michael Dickson-like 56 yards. But things went south after that — 41, then 34, then a 15-yard shank that set up a Terps touchdown.

There have been few moments to be happy about. Ehlinger and Duvernay hooked up for the long TD. Ingram scored his first college TD. Bujcevski’s soaring first punt had us all wondering what’s in the drinking water in Australia.

Texas will get the ball to start the second half. Gary Johnson’s out for the game, but Anthony Wheeler — who had to sit out the first half because of a targeting penalty in the Texas Bowl win over Missouri — will be back.