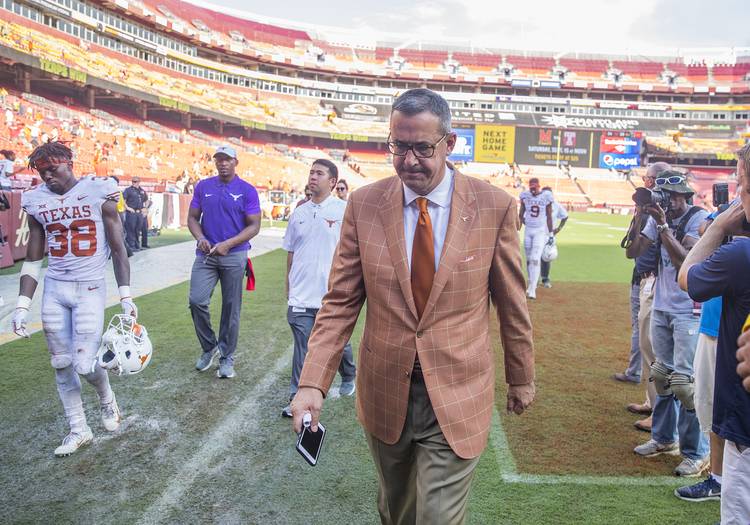 Chris Del Conte: Texas' athletic director walks off the field at the end of the game against Maryland Terrapins in the NCAA college football game, at FedExField, in Landover,Maryland Saturday, Sept. 1 , 2018 Texas Longhorns lost 34-29 RICARDO B. BRAZZIELL / AMERICAN-STATESMAN

Well, what did you expect?

Texas lost 34-29 to Maryland in a game that included plenty of déjà vu moments from last year’s season opener against the Terrapins. After clawing back from a 24-7 first-half deficit, the Longhorns turned the ball over on each of their final three possessions to seal the loss.

Fans had plenty to say, and an 86-minute weather delay that stretched the game to nearly six hours didn’t help the mood. Ride the roller coaster in reverse, starting with postgame reactions and all the way back to the effervescent time that preceded the new season.

So far, it sure  looks a lot like last season.

RELATED COVERAGE: Bohls: Somehow, ‘We Own the Middle’ just doesn’t sound as good as ‘Finish,’ Texas

RELATED COVERAGE: Golden: Texas’ defense will need to play at an elite level in 2018 to get some wins

Your yearly reminder that Charlie Strong was wildly successful before us and after us. Tom Herman simply inherited good teams and didn’t screw them up. He will not fix this team, but he’ll make a pretty penny while we keep losing. Thank you for attending my TED Talk. #hookem

'A lot of people are going to want to say it feels a lot like last year. It doesn’t for me': What Tom Herman said after Texas lost to Maryland 34-29 in 2018 season opener https://t.co/kBZDTnxMqn #Hookem pic.twitter.com/vRaLjD7sJf

@TexasFootball new season same result. Feel like we have seen this episode before. Ehlinger with a chance to win the game in the clutch and a bad decision or a bad throw leads to a pic. Still looking for the “Guy” that’s gonna lead this team. #HookEm #HereWeGoAgain #Longhorns

This is why you don’t fall for all those fun offseason “reports” spoon fed to sites by staff/players. No one knows until the real whistle blows. One year wasn’t enough. Doesn’t look like two will be, either. That said, this team will win a game or two it shouldn’t.

This little beauty allowed me to quickly forget about that @TexasFootball loss. #StillAFan #HookEm 🤘🏼 pic.twitter.com/nXpacLbgsQ

Sam can be amazing and frustrating as heck in the same game. #HookEm 🤘🏾🐂

A thoroughly disappointing game. Not going to try and sugarcoat it. #HookEm

Okay year two with this coach and the outcome is still the same….. going into Sunday with high blood pressure. #Longhorns When will we get better???? #HookEm pic.twitter.com/OBKeOqRmqM

Ugh. Can we appeal that crappy ruling to the Supreme Court? They're not far away. #hookem

ALERT: Texas-Maryland players will retake the field at 3:30 p.m. Central. We are scheduled to restart at 3:40.

When yer losing, and there’s a ‘rain delay’, but the UT Band wins in the battle of bands in the hallways. #Hookem pic.twitter.com/EZMgT5u6g8

So the delay will be just over an hour and a half.

I think the UT Band is already holding a vigil for the 2018 season pic.twitter.com/m6aGevdRM9

Not well. As the weather delay came right after they shut down alcohol sales.

It’s raining so hard that it’s leaking through #FedExField. Get it together, Dan! #CollegeFootball #TXvsMD #HookEm 🤘🏈 pic.twitter.com/ctEwk5nL9Z

And now the press box here at FedEx Field is leaking from the roof. You can't make this stuff up.

Thank you for the pic ⁦@_delconte⁩ 🤘🏼now let’s go get that win after this weather delay! #ThisIsTexas #HookEm pic.twitter.com/4JpbSZ92gX

It’s going to be nice and sloppy whenever #Texas and #Maryland resume playing after this downpour.#TEXvsMD #HookEm pic.twitter.com/E2tUy2AIFF

STATUS: Stealing chairs from under the @Redskins stadium with the UT Band to sit out the weather delay #Hookem 🤘 pic.twitter.com/dGmA02TPlG

LIVE UPDATES: Texas and Maryland are in a weather delay with the Terrapins leading 31-29 in the fourth quarter. https://t.co/j8mas67Tw0 #Hookem pic.twitter.com/dqwlztkiV8

The Texas-Maryland game has been suspended "due to a weather situation," per the game officials. Dang nabbit.

"So, the locker room is over there. We have a uniform ready for you that says Buchele on the back"#HookEm pic.twitter.com/x8xecktQ3m

There sure is a lot of Burnt Orange in Landover! #HookEm🤘 pic.twitter.com/j0OAhvrKov

At the half: No. 23 Texas’ scoring spurt has Horns trailing Maryland, 24-22 https://t.co/ImdgD0IYkO #Hookem pic.twitter.com/UQayxFk27r

We'll take points any way they want to give 'em to us. #hookem pic.twitter.com/3omAXHzEYb

Is Texas this bad or is Maryland not horrible? Texas isn’t able to move the ball or stop the big offensive plays from Maryland. Surrounded by lots of worried Longhorns fans #GameDay #Texas #HookEm #Maryland

At this Texas v Maryland game its critical that we protect our kids. This Texas fan is aligned with the ejection for targeting #JordanMcNair #HookEm

FOLLOW LIVE: Texas tangles with the Terps in Maryland to open the 2018 season https://t.co/W94yJiLDrN #Hookem pic.twitter.com/jw0aIMebNm

Kickoff is less than 5 minutes away and the stadium is less than half full – and 90% Texas. I know your 🏈 problem has some issues 🐢, but this is embarrassing #GameDay #HookEm pic.twitter.com/5WAhZDUR99

The Horns are here. #HookEm pic.twitter.com/c0lXo5jvMc

Someone is ready for their 1st Longhorns Game!!! #HookEm pic.twitter.com/Y75PlKNLl0

Fun fact: @TexasFootball is the only team to rank twice in this week’s social football mentions, with #hookem (8) and #LonghornFriday (1).

Those dark clouds ☁️ what will be Maryland’s first home game – all bad #hookem pic.twitter.com/uwojA3Gsey

Couple of ex-Horns – and maybe a future one- at FedEx for Texas v Maryland. #HookEm pic.twitter.com/N5RYpGfbGq