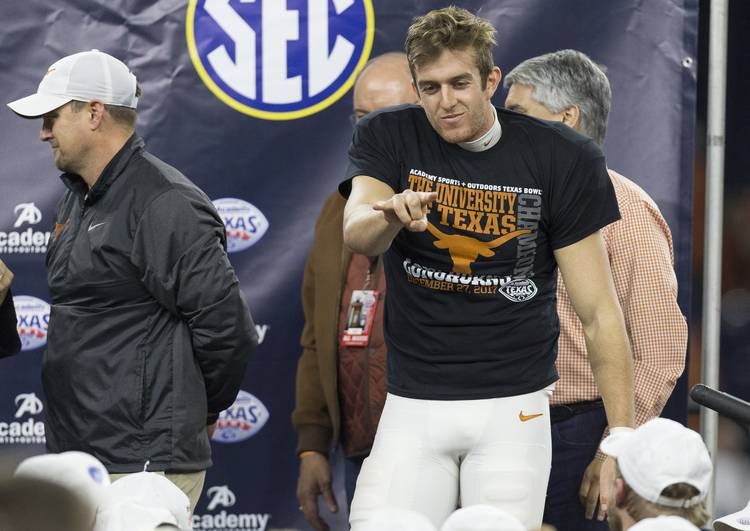 Texas punter Michael Dickson celebrates a 33-16 win over Missouri in the Texas Bowl at Houston's NRG Stadium on Dec. 27, 2017. Dickson now plays for the Seattle Seahawks. (Stephen Spillman / for American-Statesman)

Unless they were rooting for Texas, football fans probably hadn’t watched many highlights involving a punter lately. A national audience, however, was introduced to ex-Longhorn star Michael Dickson on Monday night.

A rookie punter for the Seattle Seahawks, Dickson caught the attention of football fans when he did a rare drop-kick kickoff in the fourth quarter of Monday night’s 24-17 loss to Chicago. With Seattle kicking off from midfield because of a penalty called on the Bears, Dickson’s kickoff sailed 49 yards. Later in the game, Dickson attempted a drop-kick onside kick that Chicago recovered.

A drop-kick kickoff requires the kicker to drop the ball and allow it to hit the ground before it is kicked. Kickers traditionally place the football on tees on kickoffs. In fact, a drop-kick kickoff was last attempted in the NFL by New England’s Nate Ebner in 2015.

Seattle used a fifth-round draft pick on Dickson, who won the 2017 Ray Guy Award during his junior year at Texas. Over the first two games of his professional career, Dickson ranks fourth in the NFL in punting average (51.5) and net-average (46.4 yards). A 69-yard kick by Dickson against Denver in the season’s opening week is the league’s longest punt this year.

Golden: A loss to TCU could still mean progress for Tom Herman and the Longhorns