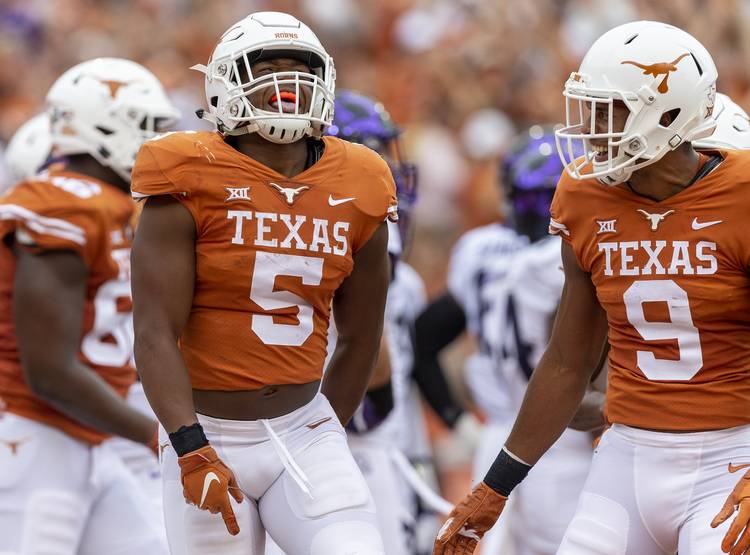 Texas running back Tre Watson (5) celebrates scoring a touchdown against TCU with wide receiver Collin Johnson (9) in the first half of a Big 12 Conference football game at Royal-Memorial Stadium, Saturday, Sept. 22, 2018. (Stephen Spillman / for American-Statesman)

Advertisement
It’s halftime at Royal-Memorial Stadium. Texas, which is a 3-point underdog today, is trailing No. 17 TCU 13-10.
Sam Ehlinger looks good. Collin Johnson has been active. The offensive line has looked really solid on pass protection. The defense has looked close to its 2017 form, more than holding its own against a TCU offense that put up 500 yards on Ohio State last week.
The Horns (2-1, 0-0 Big 12) have been in control for most of the afternoon despite the halftime score. The Frogs went ahead with 6 seconds.
TCU  converted a key third-and-1 from the 8 with 24 seconds left with a 7-yard run from quarterback Shawn Robinson, but Robinson couldn’t punch it in on the quick snap.
Gary Patterson called timeout to think about it — a second-and-goal from the 1 with 10 seconds left and no timeouts left. Robinson threw a fade to Jalen Reagor for the touchdown. Reagor was being covered by Kris Boyd. Those two already have a history today. More on that later.

TCU looked as quick as advertised on the first play of the game, marching down the field with a series of short throws that seemed to always for 6-, 7- or 8-yard gains. But things bogged down and the Horned Frogs settled for a field goal. Texas had the first chunk play of the game, a 46-yard pass from Sam Ehlinger to Collin Johnson, but it all ended with a 42-yard missed field goal from Cameron Dicker.

On TCU’s second drive, KaVontae Turpin came up limping after a third-and-11 drop; he landed awkwardly on an ankle after a hit from Davante Davis. On Texas’, Tom Herman’s binder must have said to go for it on fourth-and-4 from TCU’s 41. The Horns got it. An 18-yard pass to Johnson and an 8-yard toss to Andrew Beck set up Tre Watson’s 3-yard touchdown.

That made it Texas 7, TCU 3. It also marked the first time since the 2013 season that the Longhorns have held a lead over the Horned Frogs. That was a Texas win in Fort Worth that became memorable for two things: A long weather delay that carried the game past midnight. And it also served as the first-ever appearance for Tyrone Swoopes.

Caden Sterns left the game on the first play of TCU’s third series. Two plays later, Shawn Robinson hit Jalen Reagor on the right side for 50 yards. Kris Boyd was beaten on the play. But Boyd made up for it — partially, anyway — by breaking up a touchdown catch by Reagor on third-and-goal; the Frogs settled for a field goal.

Boyd had another beautiful breakup on what would’ve been another 50-yarder to Reagor in the second quarter; Reagor had caught it but Boyd popped it out from behind.
On that same drive, a TCU gadget play — a toss back to Turpin, who hen launched it downfield to Reagor — went awry when Sterns picked it off for his second interception of the season. Kudos to Brandon Jones, who forced Turpin into a heave-it-up throw; the play was reviewed for targeting, but no flag was thrown.
With six-and-a-half minutes left in the half, Herman went for it again on fourth-and-1 from Texas’ own 47. Daniel Young got the ball and was stopped for no gain. What went wrong? (1) The run was to the short side of the field and (2) Beck missed a block. And, while we’re at it, why was it Young and not Watson or Keaontay Ingram? Come on, binder.

Texas 7, TCU 6. A Tre Watson touchdown run — set up by a key fourth-down completion by Collin Johnson — gave Texas its first lead over TCU since 2013. The Longhorns had another shot at points in the quarter, but Cameron Dicker’s 42-yard field goal attempt was off. He made two 46-yarders last week. TCU had to settle for a pair of field goals.

TCU 13, Texas 10. The Horns led until the final 10 seconds of the half, when Jalen Reagor beat Kris Boyd for a fade-route touchdown.