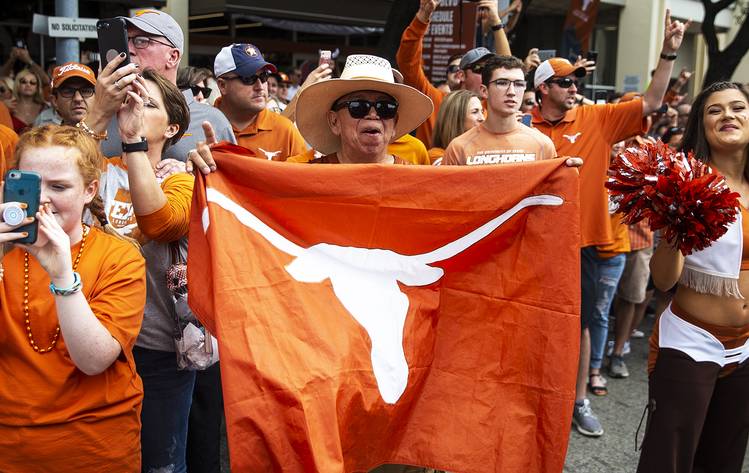 A Texas fan cheers before an NCAA college football game between Texas and TCU in Austin, Texas, on Saturday, Sept. 22, 2018. NICK WAGNER / AMERICAN-STATESMAN

How are we feeling, Longhorn Nation?

Coming off a big win last week over USC, Texas hosts TCU on Saturday in the Big 12 opener for both teams. The Longhorns provided plenty of reasons for optimism against the Trojans, but the Horned Frogs have brought nothing but dread upon the burnt orange faithful.

Which feeling is most prominent at Royal-Memorial Stadium, and which one will win out as the game wears on?

Follow along live as we live and die with the diehards, bringing you up-to-date reactions before, during and after the game.

Perfect day out at DKR and the Horns catching another Big Dub pic.twitter.com/3k5vVtRX5A

When did I know Texas was back? When we were swag surf in’ in DKR. Big 12 ain’t ready. pic.twitter.com/j51jrcqYAK

Are we good at football now??

Today's attendance is 95,124 at Royal-Memorial Stadium.

#HookEm Nice start for horns, then the chronic sense of entitlement and complacency set in and TCU is back in front.

Our defense is showing out! #HookEm

Texas Football up on TCU at the end of the first quarter 7-6. Biggest story inside of DKR? Damn that quarter went by fast! We’re not used to a game where the refs don’t review everything. #HookEm

What a stupendous afternoon for tackle football. #Horns vs. #TCU. Do you see this being a close game or a blowout?

If Tom Herman can get this Longhorn Squad a win today I will be happy and admit I was wrong about him being a horrible coach.

1955: The program cover for the Nov. 12th football game between @UTAustin and TCU. The night before, at a pep rally in Gregory Gym, head cheerleader Harley Clark introduced the "Hook 'em Horns" hand sign. At the game, it spread from students to alumni, and a tradition was born. pic.twitter.com/BJ7xvxYLDQ

Out comes The Showband of the Southwest. #HookEm #Longhorns pic.twitter.com/ydcjWwKBpN

When you go to a football game in #Texas it includes a mini #ACL concert! #HookEm @TexasLonghorns pic.twitter.com/y17Jp2WER3