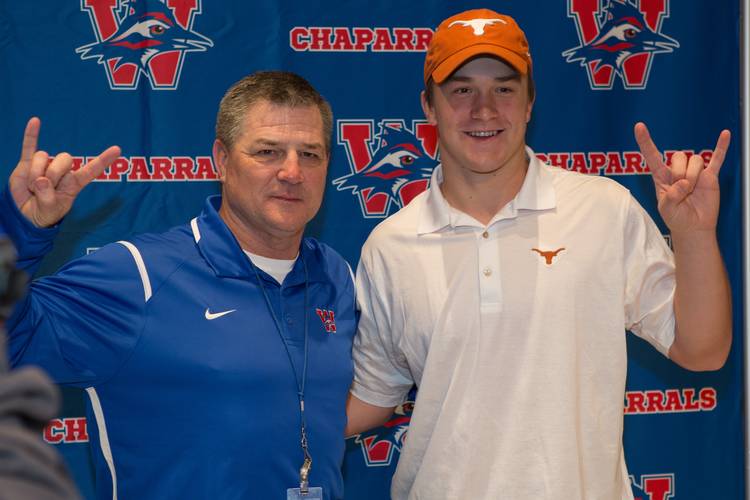 Todd Dodge once predicted that Sam Ehlinger would be a better quarterback at Texas than he was. Statistically-speaking, it only took Ehlinger until the fourth game of his sophomore season to back up those words.

With an eight-yard pass to Tre Watson in the third quarter of Saturday’s game against TCU, Ehlinger moved into 15th place on UT’s all-time passing list. Ehlinger bypassed Dodge, who threw for 2,791 yards at Texas from 1982-85. Dodge was Ehlinger’s head coach at Westlake High for three years.

The second Longhorn to throw for 300 yards in a game, Dodge is still associated with the school’s single-game records for average completion (32.6) and interceptions (five). After winning four state titles as Southlake Carroll’s football coach and leading North Texas’ football team, Dodge has compiled a 49-11 record in five seasons at Westlake. During Ehlinger’s junior year, the Chaparrals reached the 2015 Class 6A, Division I title game.

“I had a great foundation of football knowledge coming out of high school because of what Coach Dodge had taught me,” Ehlinger earlier this week.

Even though he leapfrogged his old coach on Saturday, Ehlinger is still not near the front of a long line of quarterbacks at Texas. Colt McCoy set the standard at Texas when he threw for 13,253 yards from 2006-09.