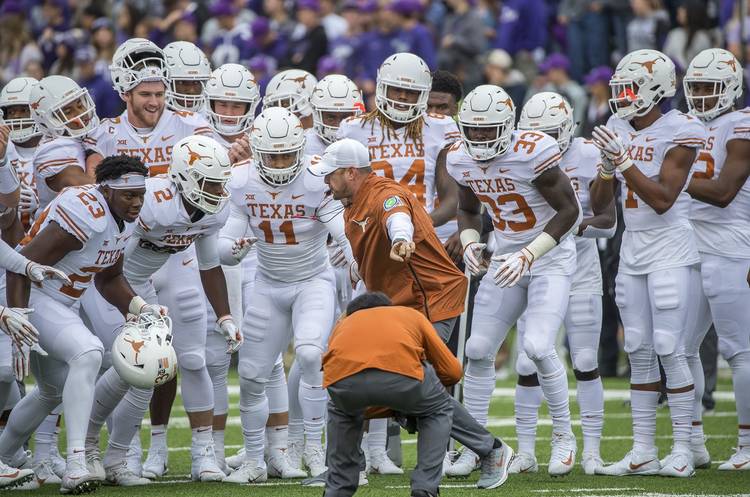 Texas coach Tom Herman warms up his team during pre-game against the Kansas State Wildcats in the NCAA college football game in Manhattan, Kan, at the Bill Snyder Family Stadium on Saturday, Sept. 29, 2018. RICARDO B. BRAZZIELL / AMERICAN-STATESMAN

It’s halftime at Bill Snyder Family Stadium in Manhattan. Texas, which is favored by 8 points today, is shutting out Kansas State 19-0.

There’s been a punt return for a touchdown. And a safety. And a running back throwing a pass back to the quarterback. Heck, Sam Ehlinger has even completed a pass to himself! And there was a goal-line stand in the closing seconds of the half.

Texas opened the game with a big missed opportunity — Ehlinger missed a wide-open Devin Duvernay some 60 yards downfield — and a punt. But from that point, it’s been all Longhorns.

Texas, of course, has a history — a bad one —in Manhattan, Kansas. The Longhorns are 1-7 all-time at Kansas State and haven’t won there since 2002.

Ehlinger is 17 of 22 for 115 yards and a touchdown. Keaontay Ingram is averaging 7.3 yards per carry. Tre Watson has rushed for 24 yards and also has thrown for 21. Collin Johnson, Lil’Jordan Humphrey and Duvernay all have three or four catches each. Texas has 191 yards of offense and has held the Wildcats to 64.

Texas 7, Kansas State 0. D’Shawn Jamison gave UT the early lead with the first touchdown of his college career, a 90-yard punt return that was the fourth-longest in school history. Sam Ehlinger was 9 of 12 in the quarter but missed an easy 65-yard touchdown opportunity to a wide-open Devin Duvernay.

Halftime: Texas 19, Kansas State 0. The Longhorns added a short touchdown pass, a safety and a field goal — and denied the Wildcats a score at the very end of the quarter on a fourth-and-goal stop.

Players that have stood out:

Keaontay Ingram: Had a 13-yard run on his first carry.

Andrew Beck: An illegal block in the back penalty sabotaged the first drive that had reached the Wildcats’ 41. Texas ended up punting.

Collin Johnson: Had a 21-yard catch helped by a nice initial move on the defender; later he converted a third-and-9 with a 14-yard reception that was 4-yard catch, 10-yard spin move and run.

And the plays that have stood out:

Kansas State will get the ball to start the second half.