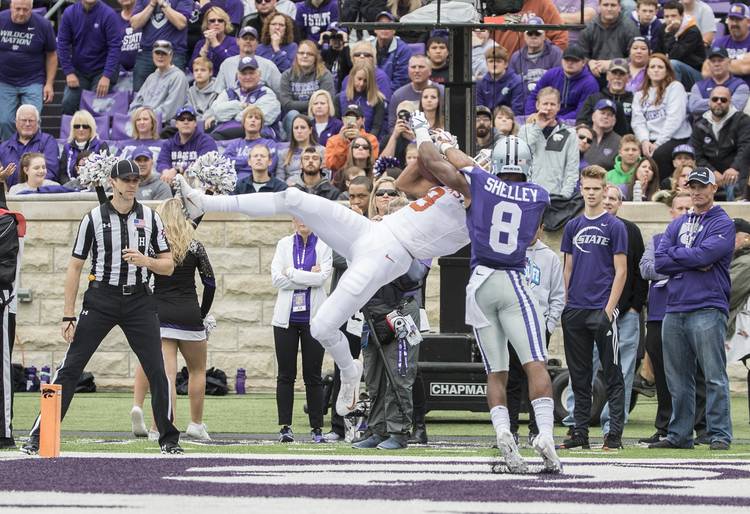 Texas wide receiver Collin Johnson (9) pulls down the ball for a score in the end zone Kansas State Wildcats defensive back Duke Shelley (8) in the second quarter of the NCAA college football game in Manhattan, Kan, at the Bill Snyder Family Stadium on Saturday, Sept. 29, 2018. [RICARDO B. BRAZZIELL/AMERICAN-STATESMAN]

It’s all over in Manhattan. No. 18-ranked Texas, which was an 8-point favorite today, has beaten Kansas State 19-14.

So yes, Texas finally won at Bill Snyder Family Stadium. But it didn’t come easy. After riding big plays — a 90-yard punt return, a safety, a throw-back pass back to the quarterback and even a rare quarterback completion to himself — the Wildcats switched quarterbacks for the second half and seized momentum. That 19-0 Longhorns lead evaporated to a 19-14 advantage with 10 minutes left.

Keaontay Ingram had three nice gains on a pair of runs and a catch, but the drive stalled on third-and-7 with 7:19 left when Ehlinger missed a diving Collin Johnson at the sideline. It forced a punt. The Wildcats took over at their own 16.

There was a 4-yard run. Then an incompletion. Then a big play by Breckyn Hager, who blocked a third-down pass to force a punt. Texas then converted a couple of key first downs and killed the clock.

Defense, big plays and steady play by Sam Ehlinger, who finished 29 of 36 for 207 yards and a touchdown. The Longhorns scored all of their points in the first half and the Wildcats scored all of theirs in the second half, and Texas scored more. There were big plays provided by Hager and Charles Omenihu, both of whom were due for big games.

Maybe the Wildcats should have gone with Skylar Thompson from the beginning. Alex Delton was ineffective in the first half, as the Wildcats’ offense sputtered. Things changed in the third quarter, but Texas woke up in the final 8 minutes.

Texas 7, Kansas State 0. D’Shawn Jamison gave UT the early lead with the first touchdown of his college career, a 90-yard punt return that was the fourth-longest in school history. Sam Ehlinger was 9 of 12 in the quarter but missed an easy 65-yard touchdown opportunity to a wide-open Devin Duvernay.

Halftime: Texas 19, Kansas State 0. One week after a 124-yard day against TCU, Collin Johnson continued his impressive run with a 4-yard touchdown catch. And Dicker added his fifth field goal of the season. The biggest standout of the quarter, though, was defensive end Charles Omenihu; in the span of three plays, he registered two sacks of Delton — the second was a safety. The Wildcats had a chance to score at the end of the half, but failed to punch it in on fourth-and-goal with 2 seconds left.

Texas 19, Kansas State 7. Skylar Thompson replaced Delton as Kansas State’s quarterback. He promptly led the Wildcats to a 10-play drive and their first score. It was the first points the Texas defense had allowed since a third-quarter field goal by TCU last week. That scoreless span lasted 57 minutes, 31 seconds. Dicker missed a 47-yard field goal try; the freshman is now 5 of 8 this season.

Final: Texas 19, Kansas State 14. After cutting Texas’ lead to 19-14, the Wildcats got the ball back with 7 minutes left. But Breckyn Hager blocked the third-down pass and Texas got the ball back with six-and-a-half minutes left. Texas converted two key third downs (a Johnson catch and an Ehlinger run) and rode Keaontay Ingram to close things out.

The Longhorns play Oklahoma at 11 a.m. on Saturday, at the Cotton Bowl in Dallas.

It’s halftime, and Texas is shutting out Kansas State 19-0