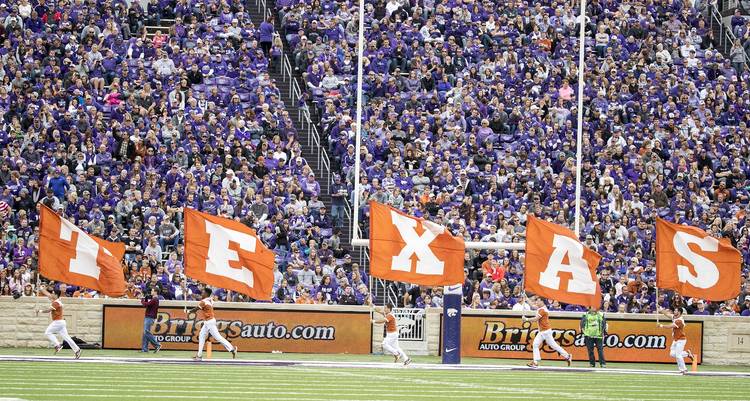 Texas Longhorns cheerleaders celebrate a score in the first half against the Kansas State Wildcats in the NCAA college football game in Manhattan, Kan, at the Bill Snyder Family Stadium on Saturday, Sept. 29, 2018. RICARDO B. BRAZZIELL / AMERICAN-STATESMAN

Texas has won three-straight games and is looking to make it four against a wounded Kansas State team that limps in at 2-2. To do so, the Longhorns will have win in a place that has been a house of horrors since the formation of the Big 12.

Only once has Texas won at Bill Snyder Family Stadium in Manhattan, and that was back in 2002. Hopes are high among the burnt orange faithful. Follow along as the No. 18-ranked Longhorns try to tame the Wildcats.

Check back throughout the game, and after, as we bring you up-to-date reactions from fans in the stadium and at home.

FINAL: Texas 19, Kansas State 14. It wasn't pretty, but the Longhorns hang on for their first win in Manhattan since 2002. We've got you covered with reaction and analysis, right here: https://t.co/zOWAoxRwyB #Hookem pic.twitter.com/b3TZ2C6lti

It was ugly. But it was a W. The 2002 curse is over. #HookEm pic.twitter.com/To7tXNgQgc

Longhorns being showered with “Beat OU” chants from the Texas fans in attendance. #HookEm

Texas WINS!! We’ve shook 2 demons now. Wasn’t pretty. But they got the W. All that matters. 4-1 and onto OU week. #hookem

A win in Manhattan is rare. I’ll take it. #HookEm

Please don't pee away the lead.

It not the drop at the half we would be losing. Wasted the whole first half effort playing like this. Disappointing. I thought we had learned to finish, and it’s obvious we haven’t. Missed FG looms large too #HookEm

Texas football games always have my blood pressure up. #Hookem

This is the exact start we needed.

Up 14-0 against a team that can't throw is exactly what we needed. The coaching is showing up. Big time.#HookEm #ThisIsTexas

Screaming during that return TD made my sore throat worse and IDGAF! 🤘🧡🐂 #Hookem

The play calling has been more aggressive and creative this game. Execution is lacking but still. Maybe Beck's play calling responsibility should be taken away from him? #HookEm

I'm watching Sam Ehlinger play QB for Texas while sitting next to Sam @mellinger for the second year in a row!

15 minutes till game time what should I drink? #hookem!!!!! pic.twitter.com/tplawPDCHL