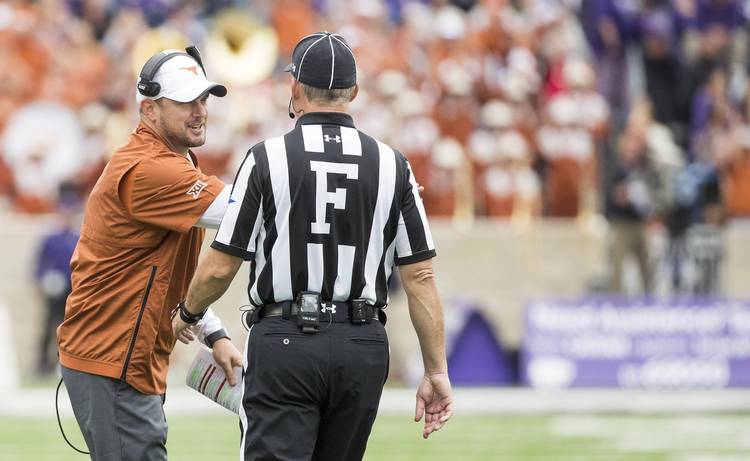 Before Saturday, only one Texas team had ever beaten Kansas State in Manhattan.

The Longhorns raced out to a 19-0 lead over the Wildcats, but had to withstand a second-half rally to hang onto a 19-14 win. Afterward, Texas coach Tom Herman addressed the assembled media, including American-Statesman reporters Brian Davis, Danny Davis and Cedric Golden, at Bill Snyder Family Stadium.

Here’s some of what Herman had to say.

“You guys watched the same game I did. It was very much the game we told our team it would be. … They were ready for that. There’s not a coach in this profession that I have more respect for than Bill Snyder. I think he’s the gold standard of what we expect our programs to be.”

Update on offensive coordinator Tim Beck, who did not travel to Manhattan:

“He’s doing really well. He had a bacterial infection in his elbow. It’s a good lesson to all of our coaches. He tried to tough it out for a week or so, and it kept getting worse. That infection had gotten into the bursa and the elbow itself. He had to be in the hospital and be on antibiotics and have surgery, to go in and clean all of that infected area out. Not life threatening.”

On penalties — Texas had 10 penalties for 104 yards, compared to zero for Kansas State:

On if winning in a ‘C-plus’ performance says something about where team is headed:

“Yeah, it probably does. That’s to take nothing away from coach Snyder and the job his team did. We won ugly, that’s the best way to put it. The key word there is won.”

On play of quarterback Sam Ehlinger:

“I thought he took the underneath stuff very well and very accurately. Missing on a couple of the deep shots early, I take a little bit of the blame because we were playing really good defense early so I should have maybe gone back to Collin (Johnson). … Other than getting a little bit tentative on a few of the deep balls, and I’ll take the blame for that, he made some big-time throws on some important plays.”