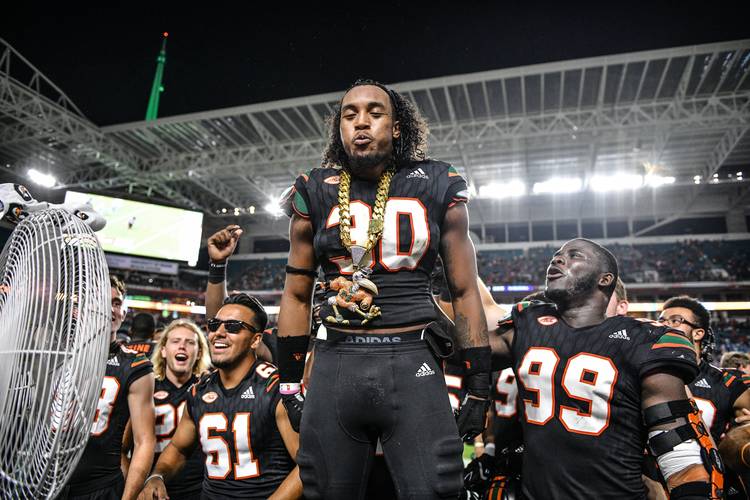 Romeo Finley #30 of the Miami Hurricanes displays the "Turnover Chain" on the bench after running back an interception for a touchdown in the fourth quarter against the North Carolina Tar Heels at Hard Rock Stadium on September 27, 2018 in Miami, Florida. (Photo by Mark Brown/Getty Images)

Football coaches are copycats by nature, so other teams started unveiling some sideline antics after turnovers or big plays. Some were funny while others had zero creativity. There’s a bunch of turnover belts. Kennesaw State unveiled a “Turnover Plank,” which is literally a piece of wood someone got at Home Depot. Oregon State could cut that in half with its “Turnover Chainsaw,” which is literally what it sounds like minus the chain.

What caught my eye was something posted by Reddit. The polling website FanJuicer.com ranked the top 20 sideline gimmicks in college football. The chainsaw took the top spot. Miami made it twice, at No. 2 for the original chain and No. 5 for the new blinged-out version from this season.

That got me thinking. Is this a list that Texas fans would want the Longhorns on?

Serious question, Texas fans. Are you happy or miffed the Longhorns aren't on this list? UT presently has no turnover gimmick. https://t.co/sRFCNviEwj

The answer was an overwhelming (expletive) no:

“We @TexasFootball don’t need a gimmick, the turnovers show up in the stats!!!,” former Texas running back and three-time Pro Bowler Eric Metcalf said on Twitter. And that was merely the warm-up act.

What’s next, helmet stickers? As Darrell Royal supposedly told a journalist one time, “We don’t do that high school BS here.

I’m happy we don’t have anything like that to be honest.

Our gimmick is Todd Orlando. We play REAL defense.

Totally fine with no gimmicks. In the words of Coach Royal, “I’m not going to candy this thing up. These are work clothes.”

Some eagle-eyed fans noticed that freshman safety Caden Sterns embraced a WWE-style championship belt after his interceptions against TCU. That’s not something specific about turnovers, though. The Longhorns have had that belt for a while, and it’s been awarded for all sorts of reasons.

In this particular case, always remember what former coach Charlie Strong said. “The university speaks for itself,” he said in 2014. “We don’t need gadgets. We’re not going to be a gadget program.”

On to this week’s mailbag.

This 4-game redshirt rule is a farce! The NCAA needs to give all players 5 years of eligibility, with no redshirts. If you graduate, you can transfer with immediate eligibility for the remainder of the 5 years you have coming to you. If you transfer prior to graduating, you lose a year of eligibility, and you must sit out that next year. You can, indeed, transfer to another school within your conference, with no additional penalties, and the head coach cannot keep you from transferring to any school of your choice.

This makes total sense, but it’s something you’ll never see. Players should have five years of eligibility, in my estimation, but in that scenario there should be no raising of the scholarship caps. Think about this: Any football athlete good enough to go pro will still leave after three years. Men’s basketball will still have the one-and-dones (until that rule gets changed, anyway).

It’s topical this week since it was discovered that running back Kyle Porter did not travel to Manhattan last week. He’s contemplating a redshirt this season. The way Tom Herman made it sound, this was Porter’s decision to protect his redshirt in case he chooses to transfer. He played in the first four games but has only one carry for 2 yards so far.

Longhorn defensive backs are not good, period. (Kris) Boyd is the worst and gets praise from the media talking-heads. He cannot cover his ass with both hands! Case in point if, a DB plays the receiver, meaning having your back to quarterback, “nobody” can see the ball coming. Fact. Texas defensive backs give too much cushion off the line. (Caden) Stearns is very good and what makes him good or above the rest is his natural ability, he plays the ball. We only have one Stearns!!!! Longhorn secondary will be shredded by (Kyler) Murray.

Texas corners Kris Boyd and Davante Davis both had a tough day in Manhattan. But I thought two pass interference calls — one on each player, in particular — were at best no-calls. This is simply how it goes at a position that’s so exposed. You are either a hero or villain each and every week. Boyd was terrific against TCU and had a difficult time against K-State. The Horns will still keep him, as they should.

Oklahoma’s Kyler Murray has completed 70.6 percent of his throws this season for 1,469 yards and 17 touchdowns with only two interceptions. The math says Murray’s completions average 19.1 yards each. Whoa. Texas defensive backs better have their head on a swivel this week and not get caught looking in the backfield.

Has OU seen a really good defense this year? I think if we shut them down up front and get some early pressure on Murray it will throw them off for the game. The key is we have to score points while we do that. If we can make it into a grind without allowing their offense to get to planing speed, I think Texas wins.

Of OU’s five previous opponents, only Army and Baylor have winning records. Army is 3-2 having defeated Liberty, Hawaii and Buffalo; Baylor is 3-2 having knocked off Abilene Christian, UT-San Antonio and Kansas. UCLA is also 0-4, by the way. So do we really know how good these Sooners are?

Meanwhile, Texas has beaten USC, TCU and Kansas State as part of its four-game winning streak. Any rational fan would agree that UT’s wins are better than OU’s. The Sooners are ranked seventh nationally because they are undefeated and winning by huge margins. Alas, how good are they really?

Army had 339 rushing yards against OU. The triple option is just plain hard to defend for anybody. The Longhorns’ rushing game has been OK. Nothing spectacular. I think we see freshman Keaontay Ingram get most of the carries this week. He’s averaging 6.1 yards per carry. It’s time to give Ingram, who appears healthy again after a knee injury, more opportunities.

I think they should start utilizing D’Shawn Jamison on trick plays. He has the athletic ability to do something special every time he is on the field.

I’m surprised nobody has talked much about Jamison’s 90-yard punt return for a touchdown against K-State. It was the fourth-longest return in Texas history and, obviously, the best play of his young career. Jamison also ran backward after a short pass and had a 14-yard loss in the second quarter. After that, Herman sent Brandon Jones out to catch punts. Call it a good learning lesson for the youngster. Run north and south, D’Shawn, not east and west.