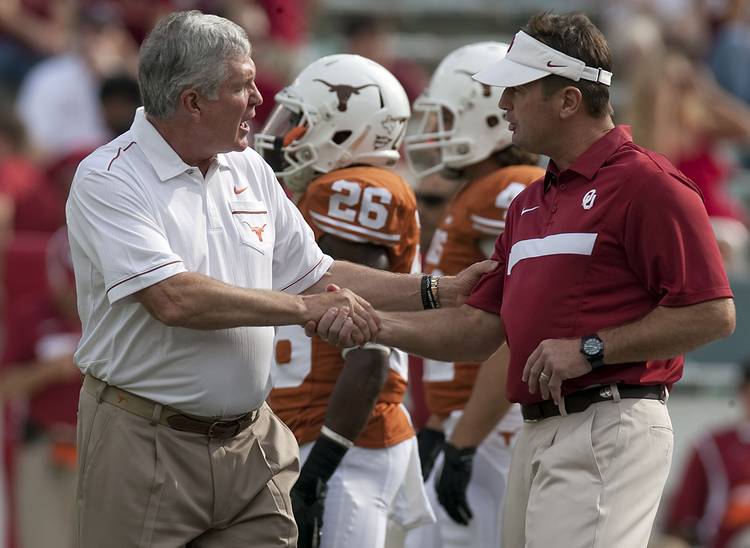 Mike Leach’s only appearance in the Texas-OU rivalry turned out to be a doozy, according to a detailed story by ESPN.

Leach, Oklahoma’s offensive coordinator in 1999, arranged for a dummy play script to be dropped on the Cotton Bowl field. Right on cue, a low-level Texas staffer found the laminated play card and took it to Texas coaches before the game.

“We were trying to figure out if it was authentic,” former UT defensive coordinator Carl “Bull” Reese told ESPN’s Jake Trotter. “We were in this state of, ‘Can we believe this?’”

The Longhorns fell behind by 17 points as Reese tried to call plays that aligned with Leach’s fake script. Reese eventually gave up guessing and went back to his previous game plan. No. 23 Texas wound up winning anyway 38-28.

On Oklahoma City radio station WWLS-AM, former Oklahoma coach Bob Stoops laughed about the incident and claimed he didn’t know about it until afterward.

“Oh, I found out a bit after the game or next week,” Stoops said Wednesday. “It’s kind of funny. Leave it up to Mike, right? That just goes with his story. But anyway, yeah, I did find out about it late. I didn’t know about it ahead of it.”

Stoops said Leach was known for scripting out the first 20 plays and generally stick close to it. In pre-game, Leach called some assistants together and reviewed the fake script. Then, Leach gave it to OU tight end Trent Smith, who acted like he stuffed the card in his pants.

The fake play card just happened to fall out onto the field, Stoops said.

“He went off and started to high kick and warm his legs up and run down the sideline and left it there,” Stoops said during the radio interview. “Sure enough, a young student assistant came scooping by and swooped it up and made its way to the locker room to bring it to the coaches.

“He had things on there like double reverse, and you know, so they bring a certain blitz like to cut it off,” the former OU coach continued. “And we’re not reversing. We hit Antwone Savage right over the middle. Mike had them set up for certain kind of plays.”

Leach, who left OU to become Texas Tech’s head coach in 2000, said the fake play calls had to seem believable.

“It had to look like our terminology,” Leach told ESPN. “But Z-25 Jet, they may not know what the hell that means, you know? But you didn’t wanna get busted, either. So it had to sound football-ish.”

Former Texas defensive back Ahmad Brooks told ESPN that game was “the most bizarre experience I ever had as a college football player.”

“I can’t tell you how wrong we were in the first three or four minutes with every playcall we had,” Brooks said. “I’ve never seen anything like it. It was complete pandemonium, and it was complete confusion.”

Mark Mangino, another former OU assistant under Stoops, acknowledged the story on Wednesday. “I was told about it in the locker room just before kick off & laughed like hell. He said shhh, don’t let Bob hear you! Never a dull moment with Mike!,” Mangino tweeted.

Said Leach: “It was a decent effort. But it would even be more legendary if we had won the sucker.”

Longhorns in the NFL: Week 4 not kind to DBs

Longhorns qualify for main draw of ITA All-American in Tulsa