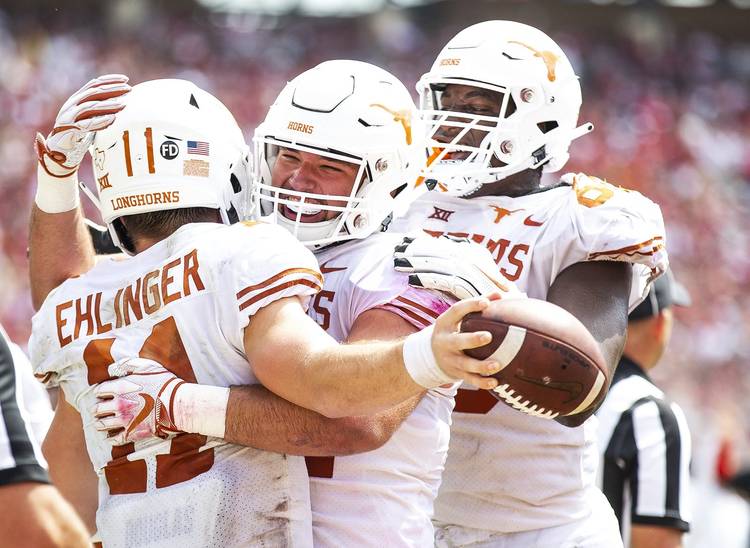 It wasn’t easy. It may have looked like it was going to be easy in the third quarter, but it wasn’t. Similar to the way Texas dug out of a 20-0 hole last year in a 29-24 Sooners victory, Oklahoma caught fire in the fourth quarter with 21 unanswered points to tie it up 45-45 with 2:38 left.

But the Longhorns, whose once-hot offense had cooled, closed it out by getting a couple of first downs on a pass interference call, an Andrew Beck catch and an Ehlinger run, and it was freshman kicker Cameron Dicker’s 40-yard field goal with 14 seconds left that won it.

What this win means:

Who knows? Maybe these Longhorns and Sooners will meet again in December in Arlington.

First, the Longhorns impressed by standing toe to toe with the seventh-ranked Sooners in the first quarter. Then they impressed by seizing control in the second and third quarters. “Finish” is the team’s mantra this season and Texas did just that, riding its critical closing drive to finish the Sooners off. For the fifth year in a row, the Longhorns were the more physical team in this matchup. They didn’t commit a single turnover. The defense limited OU’s big plays, produced three turnovers, two sacks and forced three punts, and the offense clicked almost the entire day.

Kyler Murray was as electric as advertised, but also committed a couple of big mistakes — he didn’t see Brandon Jones playing center field in zone coverage in the first half and he lost control of the ball when he pressed it onto the turf as he tried to change directions; Jones’ pick led to a field goal and the fumble led to a touchdown. The offense heated up in the third quarter and the Sooners nearly pulled this one out with 21 straight points in the fourth, but the defense couldn’t get the ball back into Murray’s hands with enough time at the end.

Wasn’t it supposed to be Texas that couldn’t win in a shootout?

Key plays that won’t make the boxscore, but were very important nonetheless:

1. After Oklahoma had regained some momentum in the third quarter — holding Texas to its first punt of the game after cutting the lead to 31-24 — Murray made a big mistake when he tried to use the football to balance himself on the ground as he changed direction; the ball remained on the ground as he lost his handle on it, and Texas recovered.

The turnover gave Texas the ball at OU’s 23. Five plays later, Ehlinger scored from 2 yards out to make it 38-24.

2. On third-and-20 in the second quarter around midfield, Ehlinger found Andrew Beck for 19 yards down to Oklahoma’s 31. Texas went for it on fourth-and-1 and converted on a short pass to Tre Watson coming out of the backfield, for 3 yards. But on the very next play, Ehlinger found Watson for a 28-yard touchdown.

The touchdown will get the headline, but it was that big catch by Beck that set it up.

4. Similarly, on third and 1 at Texas’ own 34, Ehlinger found Beck for a short 4-yard gain and a first down with 7 minutes left; Beck had to fight to hold onto the ball and secure the catch as he was hit and tackled immediately. The first down was a real gut punch to the Sooners, who trailed by two touchdowns.

How it all went down:

Texas 10, Oklahoma 7. This is the fifth time in six games that Texas has opened on defense. Oklahoma became the fourth of those five teams to score on its opening drive. The Longhorns countered with their passing game — Sam Ehlinger had passes of 36 and 29 yards on UT’s first drive, which ended with Lil’Jordan Humphrey’s first career touchdown pass. The junior receiver has thrown five passes the past two years and has now scored in three straight games. Cameron Dicker’s 44-yard field goal was his third from at least 40 yards this season.

Halftime: Texas 24, Oklahoma 17. The Sooners scored on the first play of the quarter and on the second-to-last play of the quarter. In between were a pair of Ehlinger touchdowns — a 10-yard pass and his team-leading fourth scoring run of the season. Oklahoma trailed 24-10 but converted two fourth downs to score in the final minute; it was Texas’ first halftime lead over OU since 2015.

Final: Texas 48, Oklahoma 45. Texas, up by a couple of scores, seemed content to work the clock. That led to a couple of punts, and OU took advantage. Murray’s big 67-yard touchdown run made it a one-score game with 5 minutes left, and then the Sooners tied it up with less than 3 minutes left. But the Longhorns closed the right way, getting a couple of first downs on a pass interference call, an Andrew Beck catch and an Ehlinger run, and Dicker won it at the end.

Next up for Texas: The Longhorns host Baylor next Saturday. Kickoff is at 2:30 p.m.