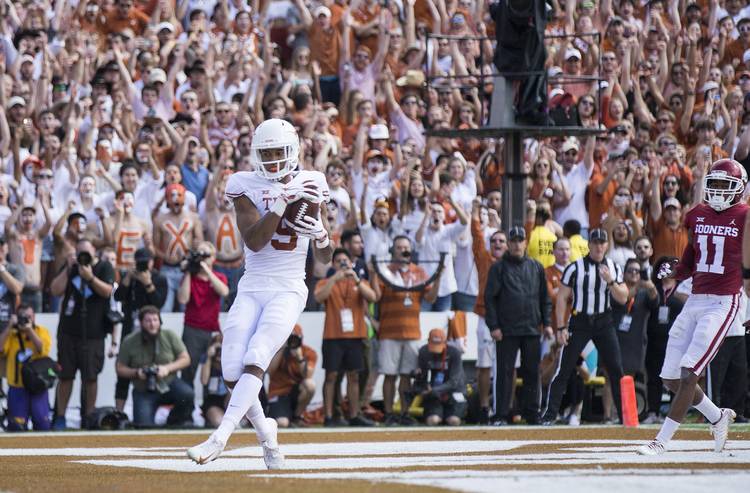 Texas Longhorns wide receiver Collin Johnson (9) catches the ball in the end zone for a score in the first quarter against Oklahoma Sooners during an NCAA college football game at the Cotton Bowl Stadium in Dallas Texas on Saturday, Oct. 6, 2018. [RICARDO B. BRAZZIELL/AMERICAN-STATESMAN]

Whatever you want to call it, Lil’Jordan Humphrey had a legion of Texas fans jumping with him as he threw a touchdown pass to Collin Johnson during the first quarter of the Red River Showdown on Saturday.

The Texas wide receiver lined up at quarterback for the Longhorns near the goal line. With Oklahoma expecting a run, Jordan pulled up and lofted a pass to Johnson.

We're in for a good one folks.@TexasFootball knots it back up. pic.twitter.com/OhpQg6RMWW

They're not trick plays, Herman says. They're special plays. And Lil'Jordan Humphrey's 2-yard jump pass to Collin Johnson out of the Wildcat with Ehlinger split wide ties the game.

That was the fifth pass of WR Lil'Jordan Humphrey's collegiate career. The junior is now 2-for-5 for 29 yards and a TD. #HookEm