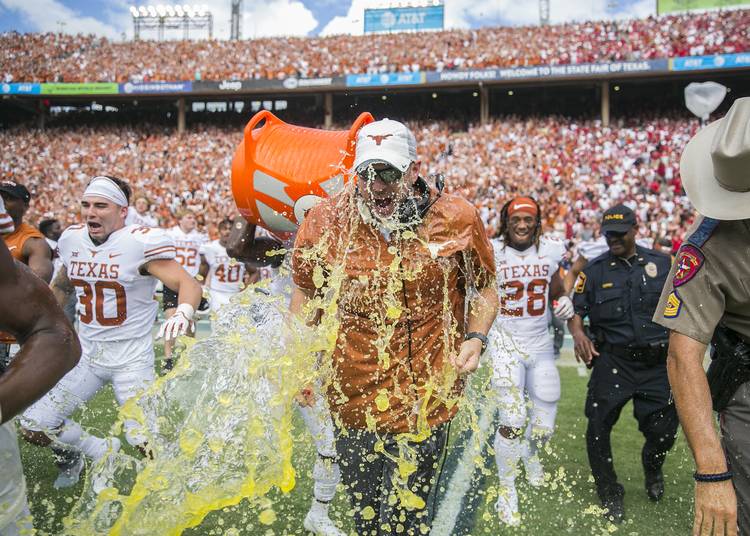 Texas coach Tom Herman gets dunked with gatorade as he celebrates a win against Oklahoma Sooners 48-45 during an NCAA college football game at the Cotton Bowl Stadium in Dallas Texas on Saturday, Oct. 6, 2018. [RICARDO B. BRAZZIELL/AMERICAN-STATESMAN]

Things just keep getting better for Texas football in 2018. The Longhorns beat Oklahoma 48-45 on Saturday, with a 40-yard field goal by freshman Cameron Dicker the difference.

Texas has now won five-straight games for the first time since 2013, and three of those victories — USC, TCU and Oklahoma — have come over ranked opponents.

Afterward, coach Tom Herman spoke to the media, including American-Statesman reporters Brian Davis and Danny Davis. Here’s some of what he had to say.

Click here for full coverage of Texas vs. Oklahoma

Tom Herman asked if Texas is back: “Tread lightly on this one. We’re concerned about where we, those in the locker room… The coaches and players are the opinions who matter most.”

Sam Ehlinger shakes his head while Tom Herman is asked if "Texas is back." Nods when Herman says those three words are irrelevant to the Horns. #HookEm

Herman on LJH’s catch that went for 19 yards but one that was sheer determination: “That was the play of the game.”

Herman also spoke with play-by-play announcer Craig Way on 104.9 The Horn‘s postgame show. Here are a few highlights from that interview.

“This kid’s kicked in a lot of big games. Texas high school football is a big deal. Lake Travis High School is a big deal. He’s been in front of tens of thousands of people kicking game-winning kicks before.”

On the play of safety B.J. Foster, who missed the Kansas State game due to a concussion:

“He played great. Got a big sack. For a guy that missed last week because of concussion to fly around the field, he did a great job for us.”

On staying focused on the next opponent after another big win:

“We have to. Baylor is not going to care that we beat Oklahoma. Just like winning ‘ugly’ in Manhattan you don’t get half a ‘W,’ they don’t give you 1-½ for beating Oklahoma.”