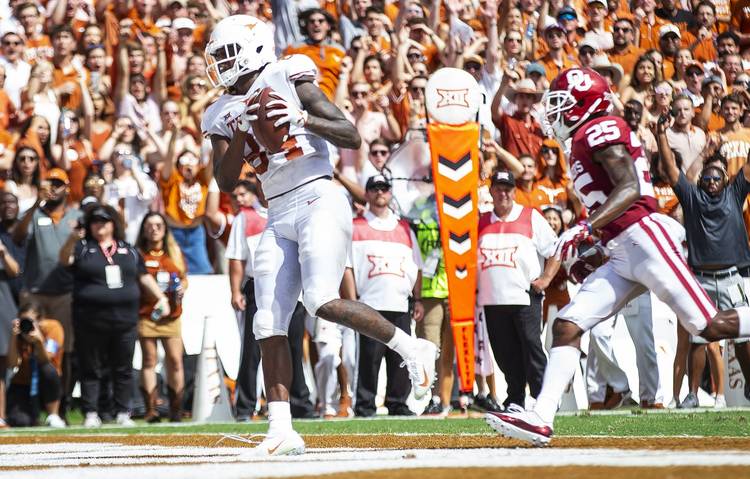 Texas receiver Lil'Jordan Humphrey (84) catches a touchdown pass in front of Oklahoma defensive back Justin Broiles (25) at the Cotton Bowl in Dallas on Oct. 6, 2018. [NICK WAGNER/AMERICAN-STATESMAN]

Humphrey was joined on this week’s honor roll by Florida Atlantic running back Kerrith Whyte, Jr., and Temple receiver Isaiah Wright. The Paul Hornung Award is awarded annually to college football’s most versatile player. No Longhorn has ever been a finalist for an award that was first handed out in 2010.

Read more: On one catch against Oklahoma, Lil’Jordan Humphrey defines the ‘culture’ at Texas

Humphrey showcased his versatility in this past Saturday’s 48-45 win over Oklahoma. The 6-4, 225-pound junior had career highs in catches (nine) and receiving yards (133), and one of his two completed passes was caught in the end zone. A 19-yard reception in the third quarter that featured Humphrey dragging a swarm of Sooners was called the “play of the game” by Texas coach Tom Herman.

This season, Humphrey leads the Longhorns with his 35 receptions and 535 receiving yards. Among the Longhorns, only Collin Johnson has matched Humphrey’s four touchdown catches. He has also run the football three times for 20 yards and is 2-for-3 on his pass attempts.

Big 12 once again rewards Texas after Ehlinger, Dicker lead the Longhorns past Oklahoma