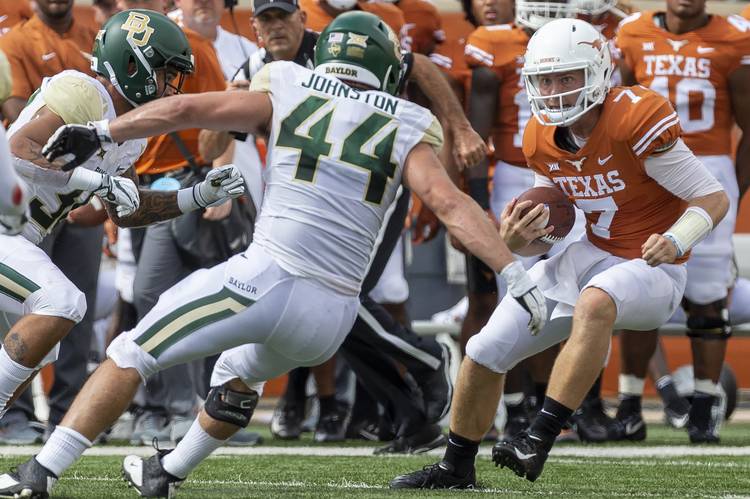 Texas quarterback Shane Buechele (7) looks to avoid a tackle by Baylor linebacker Clay Johnston (44) in the first half of a Big 12 Conference football game at Royal-Memorial Stadium, Saturday, Oct. 13, 2018. [Stephen Spillman for Statesman]

It’s halftime at Royal-Memorial Stadium. No. 9 Texas, which is a 16-point favorite today, is leading Baylor, 23-10.

Remember that time Colt McCoy exited the national championship game against Alabama on the fifth play with a shoulder injury? Texas has suffered its second biggest shoulder injury of the last 10 years: Sam Ehlinger played all of 11 snaps before leaving today — initially, the word was that his hand was bleeding. And while it was indeed bleeding, Ehlinger didn’t come back.

Midway through the second quarter, the bleeding hand had turned into a shoulder injury, and Texas was saying it’s not known whether he’ll return.

Ehlinger, who left on the first drive, spent the rest of the half on the sideline wearing headphones.

That’s been the routine for Shane Buechele, who had yet to play through the first six games. His first few snaps didn’t go so well — a delay of game penalty on his first play, then a pass that was broken up by the defender. And so this week’s game began just like last week’s ended — with a 40-yard field goal from Cameron Dicker.

Dicker, the hero of the Oklahoma game, has booted three kicks today from 40, 35 and 46 yards.

Baylor’s Charlie Brewer was 6 of 6 on Baylor’s first drive, the sixth completion a 19-yard touchdown to Denzel Mims. But the Lake Travis product has cooled somewhat. He’s 13 of 22 for 124 yards, a touchdown and an interception.

Buechele led the Longhorns to a 38-7 win in Waco last year, when he completed 27 of 34 passes for 256 yards, two total touchdowns and an interception. Today, he’s 9 of 19 for 109 yards and one touchdown. His 44-yarder to Collin Johnson — a beautifully placed throw on tight coverage, and an equally beautiful catch right in stride — is the second longest touchdown pass of the season for Texas.

But he’s also overthrown a handful of receivers.

The defense is humming. Several tackles for loss. The Bears aren’t doing much in the running game. Breckyn Hager forced a fumble that Baylor recovered. Caden Sterns picked off his fourth pass of the season. The Bears have 148 yards of total offense (Texas has 239) and only 24 rushing  yards. And Baylor has already committed eight penalties for 82 yards.

Weird moments of the day:

Baylor will get the ball to start the second half.