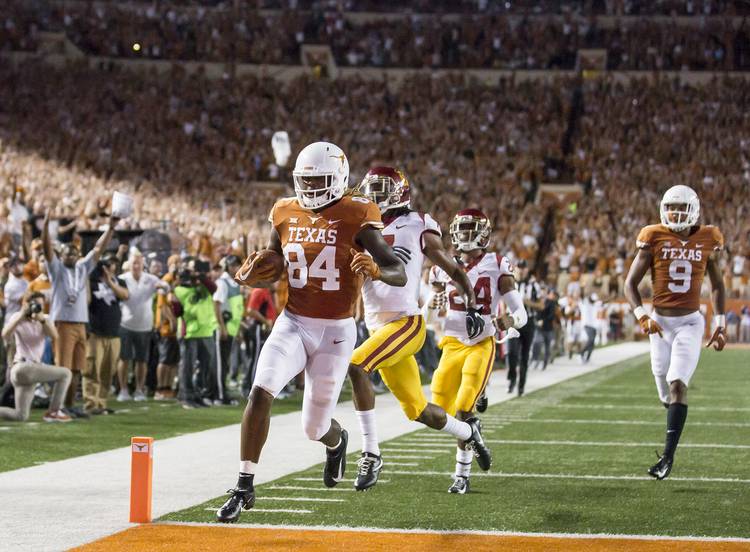 Texas receiver Lil'Jordan Humphrey (84) runs into the end zone for a score against USC at Royal-Memorial Stadium on Sept. 15, 2018. RICARDO B. BRAZZIELL / AMERICAN-STATESMAN

With a 3-yard touchdown run against Baylor this past week, Texas junior Lil’Jordan Humphrey won football’s version of an offensive scavenger hunt.

The rushing touchdown was Humphrey’s first of the season. UT’s leader in both receptions and receiving yards, Humphrey has caught four touchdown passes in 2018. He also had a two-yard touchdown toss against Oklahoma on Oct. 6.

The last Longhorn to record all three offensive touchdowns during the same season was David Ash, who pulled off that trick during the 2011 season. Ash, though, was a quarterback. To find the last non-quarterback to score a hat trick at Texas, you need to go back to 1982.

In 1982, Darryl Clark led the Longhorns in rushing yards. That season, he ran for two touchdowns and had a touchdown catch. On Thanksgiving, he threw an 87-yard touchdown pass to Herkie Walls to open UT’s scoring spree in a 53-16 rout of Texas A&M.

In the 35 years after Walls’ touchdown bingo, a handful of notable non-quarterbacks at Texas got close to matching that feat.

Earlier this season, two of Humphrey’s teammates nearly beat him to the history books. A trick toss against Kansas State by running back Tre Watson, however, was underthrown and quarterback Sam Ehlinger was stopped five yards short of the goal line. Watson currently has two receiving touchdowns and one rushing touchdown. Ehlinger has thrown for 11 touchdowns and scored six times on the ground.

Now ranked seventh in the Associated Press’ football poll, Texas (6-1) is off this week.