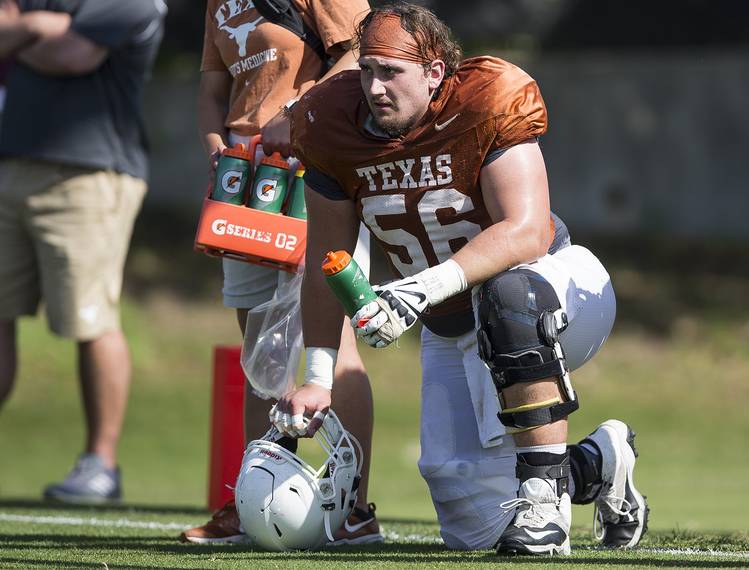 Texas center Zach Shackelford (56) kneels while taking a break during a spring practice at the Denius Fields on April 17, 2018. NICK WAGNER / AMERICAN-STATESMAN

With residents of Austin being asked to boil their water until further notice, the athletes at Texas will turn to bottled water.

On Monday morning, the city of Austin asked its residents to boil water before consuming it. The advisory was issued in the aftermath of last week’s flooding in Central Texas. Due to the increased levels of debris, silt and mud in the city’s water supply lakes, extra time is needed for filtration.

The University of Texas, of course, receives its water supply from the city. A Texas spokesperson told the American-Statesman on Monday that the compliant Longhorns will use jugs of bottled water. All of the UT athletes will also have access to individual bottles of water.

Texas football coach Tom Herman’s devotion to his players drinking water has been well-documented. The hydration tests done by the Longhorns have been a national storyline. Defensive back P.J. Locke III also charmed reporters at last year’s Big 12 Media Days with a story about the time he lost his water bottle.

At #Big12MediaDays on Tuesday, Texas DB P.J. Locke often told the story of Tom Herman and a water bottle. Here is what he told me: #HookEm pic.twitter.com/0R9dZQ33hW

Following last week’s bye, Texas (6-1) will return to action when it travels to play Oklahoma State on Saturday. The Longhorns are currently ranked sixth in the Associated Press’ national poll.