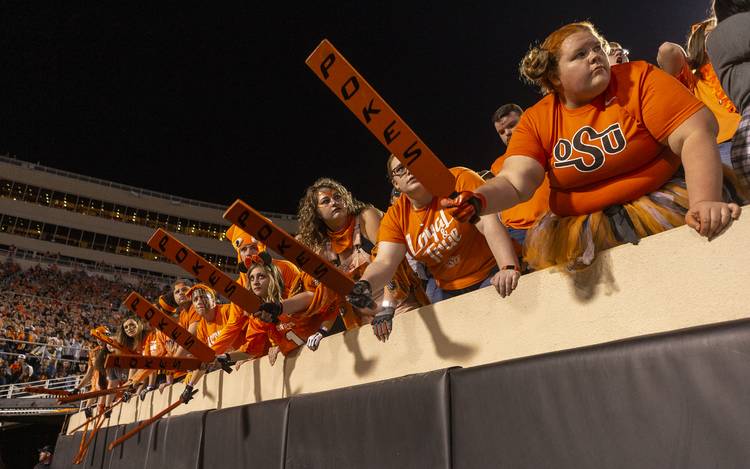 Oklahoma State fans pound their paddles against the stadium wall during a game against Texas in Stillwater, Okla., on Oct. 27, 2018. [Stephen Spillman for Statesman]

We’re about to find out how the Longhorns look when they’re forced to wear the rally hat. This is the third time Texas has trailed at halftime this season; the Horns were down 24-22 at Maryland and ended up losing 34-29 and they trailed TCU 13-10 at the break before coming back to win 31-16.

This is tied for the biggest deficit Texas has faced this season. The Horns trailed Maryland by 17 points in the first half against Maryland.

Looking for a reason why? Here are a couple:

1. The defense is struggling. No pass rush save one play to open the second quarter. The secondary is struggling. Oklahoma State’s offensive line is controlling things up front and the Cowboys are gashing Texas in the running game.

The Cowboys have 378 yards of total offense. That’s more yards than the Longhorns allowed TCU and Kansas State for the entire game.

2. Sam Ehlinger started. He looked pretty good on Texas’ first drive but ended up starting off 2 of 8 and threw five straight incompletions at one point. He’s scored two touchdowns on the ground and is 5 of 15 for 108 yards through the air.

3. Keaontay Ingram got the start, but the Longhorns haven’t established their running game. He has 24 yards on 7 carries, with a long of 11 (which also was his first carry). He’s averaging 3.4 yards per carry.

4. As announced, Kris Boyd and Davante Davis missed the first quarter as punishment for showing up late to a team function. It meant the Horns had a redshirt freshman and a true freshman at cornerback for the first quarter. It was a big quarter for embattled Cowboys quarterback Taylor Cornelius.

Not that things improved dramatically when Boyd and Davis returned. Tylan Wallace beat Boyd for a 27-yard gain on OSU’s first drive of the second quarter. And late in the half, Wallace outjumped Boyd for a 36-yard touchdown; Boyd was in position to make the play, but mistimed his jump. Wallace didn’t.

5. As if the secondary isn’t having enough of a bad night, starting nickel back P.J. Locke headed to the locker room with eight minutes left in the half with an apparent ankle injury.

6. The Longhorns are only 2 of 6 on third-down conversions.

7. Collin Johnson hasn’t been a factor. He’s got one catch for 14 yards.

It was a big score, too. The Horns needed a good drive with a touchdown to answer OSU’s quick-strike opening drive.