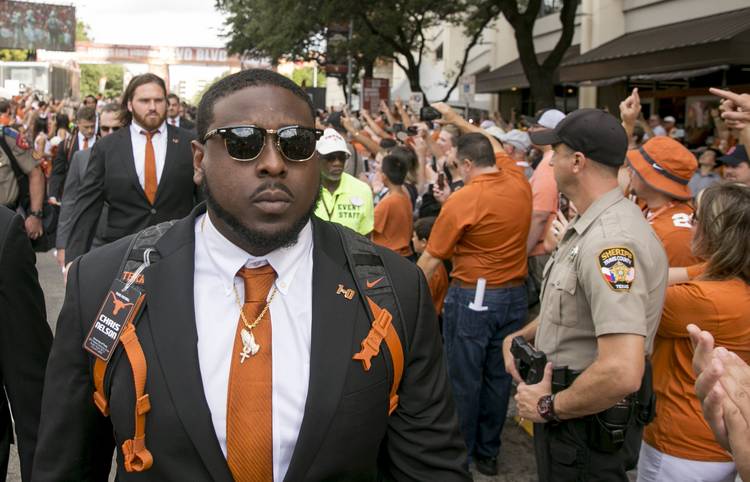 Texas defensive tackle Chris Nelson rolled his ankle during Wednesday’s practice and will not play against West Virginia, coach Tom Herman said. It’s not expected to keep the senior captain out for multiple games, though.

“Weird deal. He just rolled it,” Herman said. “It was an innocent play and rolled his ankle.”

Herman said junior Gerald Wilbon and freshman Keondre Coburn will be in the mix to replace Nelson, possibly along with junior D’Andre Christmas and senior Jamari Chisholm.

Also on Thursday, Herman said freshman receiver Josh Moore had shoulder surgery and could be out the rest of the season. Moore had a stirring 27-yard touchdown catch in the back of the end zone against USC.

Linebacker Malcolm Roach (foot) has been cleared to play on a limited basis, Herman said. However, the medical staff still projects Roach to be fully cleared for next week’s game against Texas Tech.

Defensive end Breckyn Hager and receiver John Burt also practiced this week and will play against the Mountaineers.

Wheeler to sit: Senior captain Anthony Wheeler will not start Saturday against West Virginia after getting his days mixed up and missing a weight-lifting session, Herman said. Junior Jeffrey McCulloch will start instead.

Herman admitted “it’s really bad timing, obviously, coming off of what we came off of last week.” The head coach sat three players for being late to a team function. However, Herman does not see a systemic problem that needs to be addressed.

If anything, Herman is being consistent with his discipline decisions. Wheeler will play on the second series. In football speak, being denied a start is akin to a traffic ticket.

“Do we wish Anthony had known the difference between Wednesday and Tuesday? Yes,” Herman said. “Young men have brain farts every now and then.”

LOOK: Young football fans dress up as their favorite Texas Longhorns for Halloween