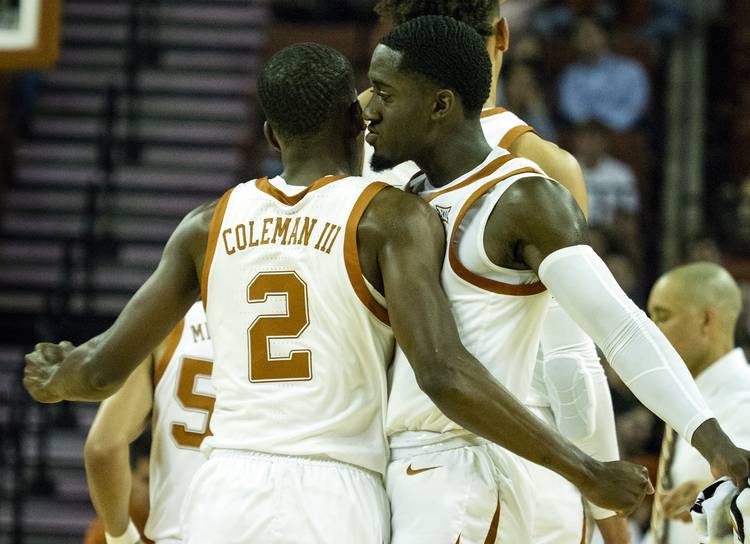 Eastern Illinois provided just enough resistance to make things interesting in the first half of Texas’ season opener on Tuesday.

But Matt Coleman III helped spark a late first-half run to give UT some space. All of coach Shaka Smart’s freshmen had chances to flash. Andrew Jones made his triumphant return to the Erwin Center. And the Longhorns pulled away midway through the affair and cruised to a 71-59 victory.

Senior guard Kerwin Roach II was benched for the night for an undisclosed violation of team rules. Without him, the Horns (1-0) probably were denied some scoring punch. Coleman finished with a team-high 13 points on 5 of 9 shooting.

But transfer guard Eli Mitrou-Long made up for it with nine points in his UT debut. Jaxson Hayes, a 6-foot-11 freshman, had a thunderous, two-handed flush as part of his 12-point debut. Dylan Osetkowski had nine points and five rebounds, and freshman guard Courtney Ramey also got past first-game jitters and scored seven.

Mitrou-Long waited a full year for Tuesday night. Sitting out last season per NCAA transfer rules, the 6-foot-1 guard from Mount St. Mary’s had plenty of time to get up to speed with Big 12-level college basketball.

Mitrou-Long actually flirted with a triple-double, getting nine points, six rebounds and six assists. Reggie Freeman is still the only player in Texas history to post a triple-double in February 1996 against TCU.

Texas coach Shaka Smart found the perfect way to get Jones into the game in the second half without making a big fuss, something he’s wanted to avoid. At the media timeout with 11:40 left, Jones checked in during the break and snuck out onto the floor.

Once the crowd realized UT’s lineup, fans rose to their feet. The ovation started slow and built to a roar. Longhorns fans gave a standing ovation to the junior guard who battled leukemia throughout 2018 and managed to find his way back to the Erwin Center floor.

Jones didn’t waste any time mixing it up, either. He dove on the floor and forced a jump ball on the first defensive possession. Jones looked a little tentative at times, which is understandable. But he deftly stepped through a double team and went to the rim and drew a foul.

With 9:16 remaining in the game and fans on their feet, Jones hit the second of two free throws. The place went wild. He finished with one point, one rebound and one assist in nine minutes.

You might be able to hear groans at various points this season whenever the Horns start cold from 3-point range. Texas started 1 for 6 from long range against EIU. But the Horns finally got it going as the first half wore on. Jase Febres hit a pair of treys, both from the left corner. Freshman Kamaka Hepa got his first 3-pointer as a Longhorn, and Coleman hit a pair.

Texas finished the game hitting 8 of 25 shots from long range — a rather pedestrian 32 percent.

One of the keys to this season is Texas’ ability to create its own momentum when none exists. Take the late stages of the first half as Example A. The Panthers had a 25-23 lead with about four minutes left. Mitrou-Long stepped into the void, hitting an 18-footer and then burying a 3-pointer.

Hayes leaped out of the gym to block Josiah Wallace’s shot, sparking a runout. Mitrou-Long had a nifty dish to Coleman, who scored and drew the foul. Then, Long penetrated and scored again, finishing his first half with nine points on 4-of-6 shooting.

The Horns closed the half on a 15-3 run capped by Hayes’ thunderous dunk and had a 10-point lead at the break. Finally, some breathing room.

Texas will play Arkansas on Friday in a rather unique setting: Fort Bliss in El Paso. The Longhorns and Razorbacks agreed to play in an ESPN-created matchup as part of the network’s series of games in military settings to honor U.S. troops. It will be Arkansas’ season opener. The Hogs were 23-12 last season under coach Mike Anderson and knocked out in the first round of the NCAA Tournament.