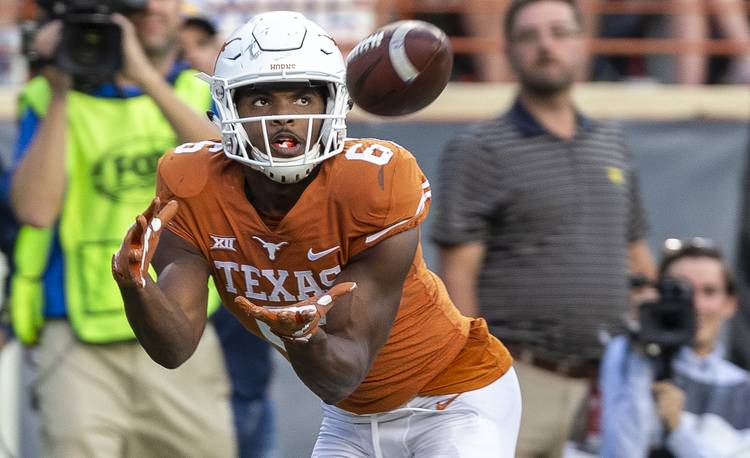 Duvernay won a gold medal in the Class 6A 100-meter dash while attending Garland Sachse High. He was also timed at “4.3-something” while competing at The Opening in 2015. Duvernay answered in the affirmative on Tuesday when a reporter asked if he was the fastest Longhorn, but he couldn’t say whether Kris Boyd, John Burt or Josh Thompson would win silver in a race among teammates.

“I guess the only way to figure that out is to have them race,” junior receiver Collin Johnson said. “We may have to do that after the season because right now we’ve got to focus on beating Tech.”

Opposing defensive coordinators know all about Duvernay’s speed.  After a quiet 2017 season, Duvernay is averaging 12.5 yards over 27 catches. The Longhorns’ Z receiver gave Texas a late (but short-lived) lead over West Virginia last week when he broke free on a 48-yard touchdown catch.

Duvernay has caught five touchdowns in his career. His shortest score covered 39 yards, and he had an 80-yard touchdown against Kansas State in 2016. Duvernay’s average career touchdown catch has been 61 yards, which is the best mark among UT’s receivers and tight ends.

Duvernay, though, thinks he has more to offer the Texas offense than just speed. Said the 5-11, 210-pound Duvernay: “I feel like there’s more to my game. I’m obviously a deep threat, but I feel like I can do everything. (I can) take short passes, intermediate passes, get involved in the run game.”

Johnson and Lil’Jordan Humphrey, another junior receiver, have taken pride in their run-blocking throughout the season. Duvernay is the same way. Duvernay credited assistant coach Drew Mehringer with his development as a blocker. An impressive performance in the weight room — Duvernay squatted 600 points in UT’s off-season weight training — has also helped.

“Most of the team knows I’m pretty strong and (they have) respect for me,” Duvernay said. “I haven’t really caught anyone off guard.”

Ahead of trip to Lubbock, Tre Watson explains why he chose UT over Texas Tech