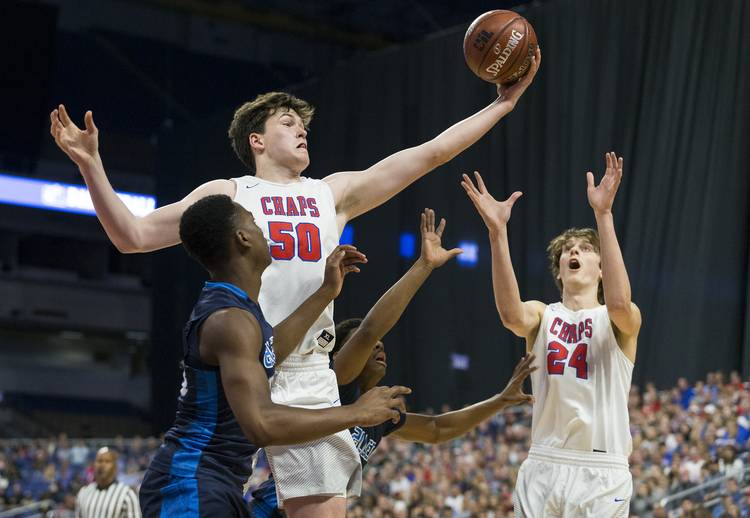 Westlake's Will Baker (50) and Matthew Mayer (24) reach for the rebound over Allen's Jaylon Scott (20) during a UIL Class 6A boys high school state semifinal basketball game at the Alamodome in San Antonio, Friday, March 9, 2018. (Stephen Spillman)

Growing up in Austin, immersed in a city surrounded by all things burnt orange, Will Baker still had to weigh everything about his college decision equally. Texas had some good qualities, but so did UCLA.

The 7-footer from Westlake, rated the nation’s seventh-best center in the 2019 class, wants to develop as an athlete. But he also loves making short movies and enjoys film.

On Thursday, several hundred Westlake fans gathered at the school to watch a short film Baker made to announce his college decision. A basketball rolled up to Baker’s foot. He picked it up wearing a burnt-orange No. 50 jersey. He’s a Longhorn.

A group of Baker’s friends jumped out of their seats and yelled, “Hook ’em!”

“It can be hard when people tell you go to Texas. Not as many people say go to UCLA,” Baker said after the ceremony. “Just living in Austin, people like to say go to Texas, Hook ’em or whatever. Really, it comes down for me personally what I feel in my heart.

“It’s cliche, but it’s true,” he added. “You’ve got to look at the facts, too. Look at the situation, the pros and cons of each school. When the feeling inside matches up with what’s the best fit as far as pros and cons, then that’s how I decided.”

Baker was the District 25-6A MVP last season as a junior and averaged 19.4 points and 8.6 rebounds per game while shooting 67 percent from the floor. He was the American-Statesman’s boys basketball player of the year.

Horn burnished his reputation for helping Jarrett Allen and Mo Bamba become one-and-done centers while at Texas. It’s still unclear whether Baker will stay for one or multiple years, but at least he’ll be suited up for the 2019-20 season.

“I think any time you see a program have a proven record of developing bigs, for them to be successful and playing through the post, I thought that was important for Will,” Westlake coach Robert Lucero said.

Baker stressed numerous times how impressed he was with Texas’ approach in recruiting. The school targeted him early, and current players were happy to pitch in.

At the Texas Tip-Off, Baker’s family sat right behind the UT bench. Guard Matt Coleman III came out holding a white pasteboard with the message “We Want Will.” It also featured a hashtag — #BakeShow.

“I just hope the message got through that he knows we want Will Baker,” Coleman said that night, “and I’d love to play with a guy like Will Baker.”

The message was received.