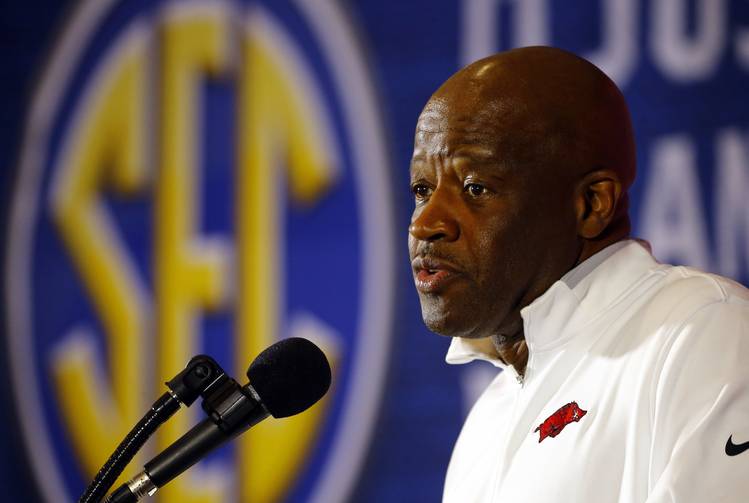 In this Oct. 17, 2018, file photo, Arkansas coach Mike Anderson speaks to media during the SEC men's NCAA college basketball media day, in Birmingham, Ala. Even with the All-SEC center back in the mix, the Razorbacks and coach Mike Anderson return only three scholarship players this year. (AP Photo/Butch Dill, File)

About the series: Arkansas leads the all-time series 87-67. The longtime Southwest Conference rivals last played at the Toyota Center in Houston on Dec. 17, 2016. The two programs have met on the basketball court only five times since Arkansas left the SWC for the Southeastern Conference after the 1990-91 season.

About the Longhorns: Senior Kerwin Roach II will make his season debut after sitting out three athletic contests for an undisclosed violation of team rules from last spring. Roach has been the Horns’ most consistent offensive player during preseason practice. While he sat in Tuesday’s season opening win over Eastern Illinois, Elijah Mitrou-Long had nine points, six rebounds and six assists in his UT debut. As a team, Texas shot 50 percent overall and built a 23-point lead in the second half. They were beat on the offensive glass, 10-6.

About the Razorbacks: While Texas has already opened the season, Arkansas has played only two exhibitions. This should be a considerable step up from Tusculum and Southwest Baptist. Still, coach Mike Anderson is 16-0 in his career in season openers, winning those games by an average of 17.8 points. This team has nine newcomers; it’s the youngest squad Anderson has ever coached. Daniel Gafford was a preseason first-team All-SEC pick and widely considered a NBA lottery pick for the 2019 draft.