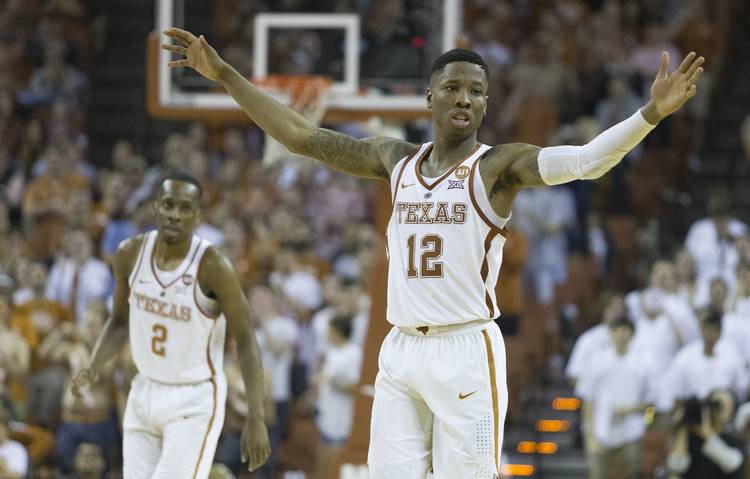 FORT BLISS — Offensively, it was offensive. Texas went almost 10 minutes in the second half between baskets. Against most teams, that’ll get you run out of the building on any night of the week.

Arkansas is in rebuilding mode, though. This is probably the youngest team Mike Anderson has ever coached.

So Texas hung in there Friday night during the Armed Forces Classic with free throws and some clutch shooting by Kerwin Roach II. His 3-pointer with 1 second left in regulation forced overtime. He threw a terrific pass to Jaxson Hayes on a give-and-go for a dunk in overtime.

Courtney Ramey scored on a stunning floater with 47 seconds left, and the Razorbacks couldn’t get a clean look on their last possession as the Longhorns held on for a 73-71 overtime win.

Roach finished with 18 points as the Longhorns improved to 2-0 this season. Jericho Sims had 14 points and five rebounds before fouling out late. Dylan Osetkowski also added 11. But it was UT’s performance at the line that made the difference. The Horns were 21 for 30 one year after finishing last in the Big 12 in that category. On Friday, it won the game.

Roach missed the season-opening win over Eastern Illinois after getting suspended for a violation of team rules. He saved the Longhorns’ bacon against the Hogs. Roach hit a 3-pointer with 2:49 remaining in regulation and then drilled another to tie things up with 1 second left, forcing overtime.

Daniel Gafford, projected by many as a 2019 NBA lottery pick had 20 points. His one-on-one battles against Sims will make for some terrific learning moments in the coaches’ offices in the coming days.

ESPN trucked in literally everything for this made-for-TV matchup. That includes the basketball court itself, the baskets, the LED video boards, everything. Nike even supplied new uniforms for both teams featuring camouflaged-themed colors. On the backs, there were no names. Only “U.S.A.”

Special shout-out to Texas’ radio announcers Craig Way and Eddie Oran. Their connection went kaput with about four minutes left in the first quarter. Say good night to the internet at Fort Bliss, as Way would say. They went old school and kept broadcasting through the telephone, passing it back and forth.

For some reason, both teams went flying off the tracks shortly after the second half began. There was a lot of back and forth with no payoff. For anybody. During one stretch, the two teams combined to make just 2 of 21 shots.

The Razorbacks finally got things going when Isaiah Joe hit a 3-pointer and then a long jumper to make it a one-point game. Then, his 3-pointer gave Arkansas a 49-47 lead. At that moment, Texas had made only one of its last 13 shots.

The venue itself made for some odd visuals. The Soto Center is a recreational center, not a traditional arena. Texas started 0 for 5 from 3-point range and fell into a 13-5 hole. Things turned when Elijah Mitrou-Long buried a trey, followed by Roach and then Osetkowski on three consecutive possessions.

Ramey drilled one, then Kamaka Hepa got in on the act. Ramey and Roach had dunks, and finally Jase Febres buried one from downtown as Texas went on a 13-0 run.

Texas is headed back to Austin for two home games next week in the Continental Tire Invitational regionals. UT will play Louisiana-Monroe on Monday and then host The Citadel on Friday. The Horns will then “advance” to the championship round in Las Vegas for two games Thanksgiving week — vs. North Carolina (Nov. 22) and either Michigan State or UCLA (Nov. 23).