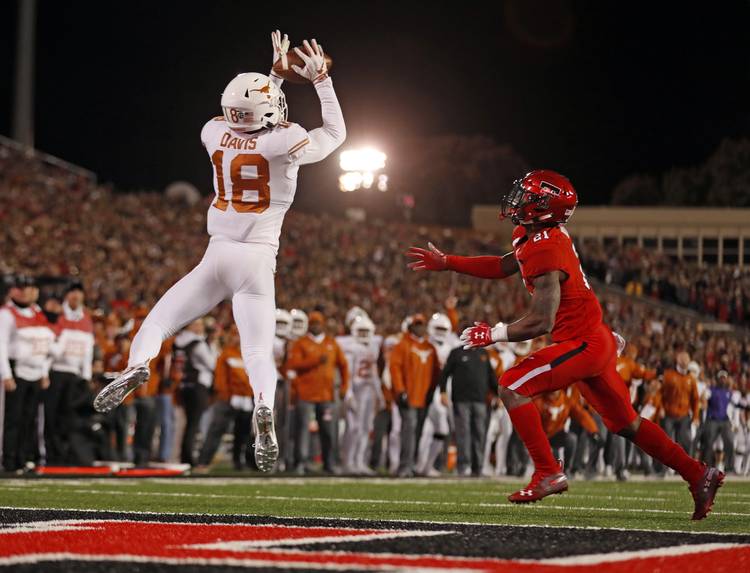 Texas' Davante Davis (18) intercepts a pass in the end zone during the first half of an NCAA college football game against Texas Tech, Saturday, Nov. 10, 2018, in Lubbock, Texas. (Brad Tollefson/Avalanche-Journal)

The cowbells are clanging. Texas is going without starting safety Brandon Jones for the second straight game and without starting wide receiver Colin Johnson, both of whom were ruled out earlier today. Lil’Jordan Humphrey is playing out wide and Jerrod Davis got the start in the slot.

The defense looked sluggish again to start the game. But there was a big play made on Tech’s second drive and the D has looked good since. Jett Duffey, Tech’s redshirt freshman who’s starting for Alan Bowman, has made one big redshirt freshman mistake. You can make the case that it turned this game around.

The offense has been up and down. Humphrey’s having a nice night. The offensive line isn’t. Tre Watson got the start over Keaontay Ingram. Sam Ehlinger has already been sacked four times. And Cameron Dicker booted his longest field goal of the season — 52 yards.

Oh, and a critical fourth-down gamble late in the half backfired on the Red Raiders, and the Longhorns scored 17 unanswered points until Clayton Hatfield’s 41-yard field goal with 7 seconds left.

There. All caught up.

For the eighth time in 10 games, the Horns gave up points on an opponent’s opening drive. Duffey’s touchdown to Vasher was the score, but a key fourth-and-5 conversion at UT’s 44 (a 6-yard pass) was the key play.

Tech later got down to Texas’ 1, but two runs lost yardage and Davante Davis picked off an ill-advised pass by Duffey. It was Caden Sterns who pressured Duffey into the throw.

Humphrey picked up 55 yards on two catches, and the quarter ended with the Horns at Tech’s 24. Dicker hit the 52-yarder, helped by a brisk wind at his back, to cut the lead to 7-3.

Later, the Horns, felled by a coaching gamble last week, rolled the dice on fourth-and-4 from Tech’s 43-yard line with 9:25 left in the half. Ehlinger threw a very well-placed pass to a well-covered Andrew Beck streaking across the middle.

The gamble paid off. Ehlinger placed another nice throw to Humphrey in the end zone — he had five catches for 90 yards and the score to that point.

Speaking of fourth-down gambles, Kliff Kingsbury went for his second one of the night on Tech’s ensuing drive. The Raiders were stuffed on fourth-and-1 at their own 34, giving Texas a short field that Ingram converted into a touchdown.

Watson has nine carries for 36 yards. Ingram has 27 yards on seven carries plus the score.

Humphrey is having a big night. He’s got six catches for 109 yards and a touchdown.

The Longhorns will get the ball to start the second half.