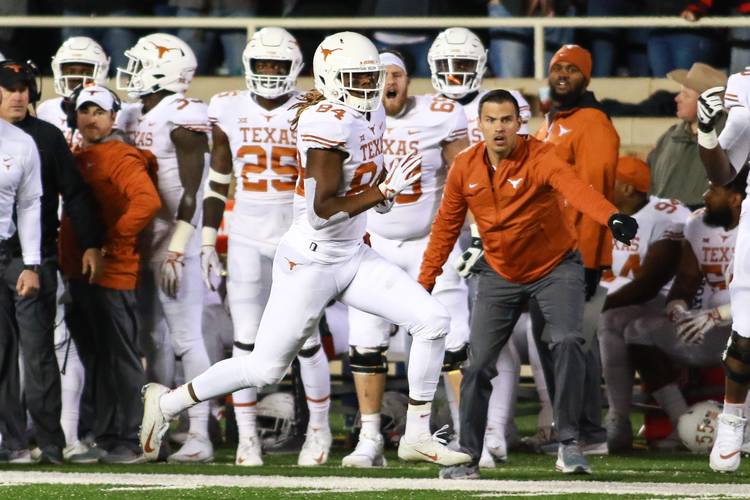 It’s over in Lubbock. No. 19 Texas, with no more wiggle room for its hopes at making the Big 12 championship game, has escaped with a wild 41-34 victory Texas Tech.

This one looked like Texas was on cruise control in the fourth quarter, up 34-17 with 10-and-a-half minutes left in the game. But Tech roared back with 17 unanswered points to tie it up 34-34 with 1:45 left.

Then the Longhorns, with overtime in their back pocket, instead went for the win — getting it on Sam Ehlinger’s gutsy 50/50 pass to a well-covered  Humphrey for a 29-yard score with 23 seconds to go.

“At the end of the day, offensively you learn as a young coach: Think players, not plays, at critical moments,” Texas coach Tom Herman said immediately afterward.

As expected, Tech went without quarterback Alan Bowman, who was hospitalized last Saturday night after the loss to Oklahoma with problems from a collapsed lung injury. Jett Duffey, the redshirt freshman who looked electric against the Sooners, sure looked like a redshirt freshman against the Longhorns. He committed three key turnovers, all in the red zone, one at the goal line.

Things looked comfortable in the fourth until Tech made it interesting with a long scoring bomb, a surprise onside kick play, staying alive on an instant replay fumble ruling and another touchdown pass. Suddenly, what had been a 34-17 Longhorns lead was a 34-27 game with less than five minutes left.

The Horns, needing to string together a couple of first downs, instead went three and out and punted it back with 3:09 left.

Duffey hit Antoine Wesley — who was well-covered by Kris Boyd — for a 47-yard strike downfield. Then he hit Seth Collins for 12. Now at Texas’ 23, Duffey  found Ja’Deion High for 14 yards to Texas’ 9.

On the next play, Wesley scored with 1:45 left.

The Longhorns took over at their own 25. Ehlinger evaded what would’ve been his sixth sack for a short 3-yard gain. Then he kept it for 18 yards to the 46, with 1:15 to go. Jerrod Heard made a nice 11-yard grab for a first down at Tech’s 41 with 56 seconds left.

Ehlinger threw incomplete to Humphrey on first down. But then he scrambled for a weaving 12-yard gain, and while it looked like maybe Cameron Dicker would be asked to decide it, Ehlinger went for the touchdown to Humphrey, who high-pointed the ball at the 3 and then tip-toed in for the game winner.

The players of the game

Their impacts tonight were huge. Texas had announced earlier in the day that starting wide receiver Collin Johnson and starting safety Brandon Jones would miss the game. Humphrey moved to the outside and responded with a big night — 8 catches for 159 yards and two touchdowns. He was clutch. And Davis made two important plays — intercepting an ill-advised Jett Duffey pass at the goal line, a play which jump-started the defense, and then a strip-and-fumble recovery on a Duffey keeper on the sideline in the third quarter.

1. The two teams that will play in the Big 12 title game are going to come from the four that are bunched at the top of the conference standings, all separated by one game. Oklahoma (6-1) and West Virginia (6-1) will play each other the day after Thanksgiving. Texas (5-2) and Iowa State (5-2) play next Saturday in Austin.

The Sooners came thiiis close to stubbing their toe on Saturday. They escaped Oklahoma State in Norman, 48-47. The Mountaineers cruised past TCU 47-10.

Iowa State will be without star running back David Montgomery for the first half. He was ejected in the second half today in the win over Baylor.

2. The win snapped a two-game losing streak for Texas.

The two teams combined to go for it on fourth down four times. The Longhorns won the fourth down battle and subsequently the war. Texas won three of those four fourth downs:

Second quarter: Tom Herman rolled the dice on fourth-and-4 from Tech’s 43-yard line with 9:25 left in the first half. Ehlinger threw a very well-placed pass to a well-covered Andrew Beck streaking across the middle. That gamble paid off when Ehlinger finished the drive by placing another nice throw to Humphrey in the end zone — he had five catches for 90 yards and the score to that point.

Second quarter: On Texas Tech’s ensuing drive, Kliff Kingsbury went for his second fourth down of the night. The Raiders were stuffed on fourth-and-1 at their own 34, giving Texas a short field that Keonaty Ingram converted into a touchdown.

Texas lined up in the power formation with Ehlinger in the shotgun, Andrew Beck as an H-back and Daniel Young in the backfield. Ehlinger faked the handoff to Young and zipped it to Devin Duvernay on the side of the end zone.