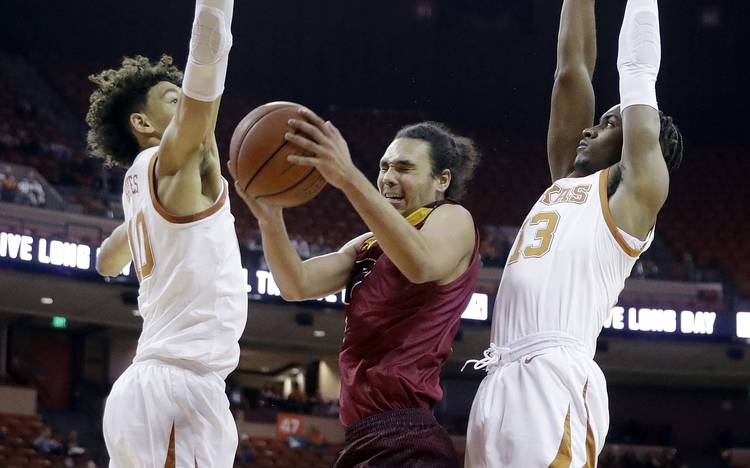 What’s that old saw? Don’t tell me about the pain, just show me the baby?

That’s how it goes these days with Shaka Smart’s Longhorns.

Texas struggled for long stretches on Monday against Louisiana-Monroe but the end result was a 65-55 victory at the Erwin Center.

The offense sputtered at times, alternating from cold to hot and back again. The defense let a group of motivated Warhawks (2-1) hang around even without their leading scorer. But seniors Dylan Osetkowski had 12 points and Kerwin Roach II added 13 more to push the Horns to 3-0.

Probably the most intriguing player on the floor was Jaxson Hayes, who finished with 11 points on 5-of-8 shooting. His dunks this season could be a sight to behold.

The Horns shot 41.9 percent overall after a mediocre start. But in a troubling sign, Texas was just 6-for-25 from 3-point range.

Osetkowski sort of sputtered through the first two games. Against the Warhawks, he was more active around the basket and got rewarded. He opened with a 3-pointer from the right corner, which was his trademark spot last season. His three-point play in the second half was via sheer hustle. He finished 4-for-8 from the floor and grabbed 10 rebounds.

The slip-screen dunk or layup for Hayes should be one of the Longhorns’ most called plays this season. Neither Arkansas nor ULM had an answer for it. Hayes threw down a dunk to spark a mini-flurry in the first half. Two possessions later, he dunked again in transition to give Texas a 28-24 lead.

In the second half, Hayes had a nifty right-handed hook shot and blocked two shots in the span of three ULM possessions. And he’s only a freshman.

The Longhorns simply make it far more difficult than it needs to be. First off, they started 1-for-8 from the floor. Then, their defense failed them as the Warhawks went on a 11-0 run. Making matters worse, Texas went 5:26 without a field goal, similar to the long stretch against Arkansas that went over nine minutes. The Horns had just a one-point lead at the break as they went 5 for 16 from 3-point range in the first half.

All it took was one little run for Texas to finally create some breathing room. And it happened with Eli Mitrou-Long, the transfer from Mount St. Mary’s, on the floor. Keep an eye on him throughout November and December.

Mitrou-Long drilled a 3-pointer from the top of the key to spark a 16-0 run that gave Texas a 59-42 lead. Roach had a follow-up jam off a Matt Coleman miss. Osetkowski had a nifty three-point play, and then Roach threw an alley-top to Hayes for a dunk.

Midway through the half, Texas was 10 for 20 shooting, an eye-opening difference from the first half. It’s amazing what makes a few shots will do.

Texas will next host The Citadel on Friday in the second game of the Las Vegas Invitational. The Southern conference school was 0-1 going into Monday’s action. The Citadel was 11-21 last season. After that, the Longhorns are off to Las Vegas for Thanksgiving weekend action against considerably tougher foes. The first is North Carolina on Thanksgiving day.

After some tough struggles in recent years, Iowa State has Longhorns’ attention