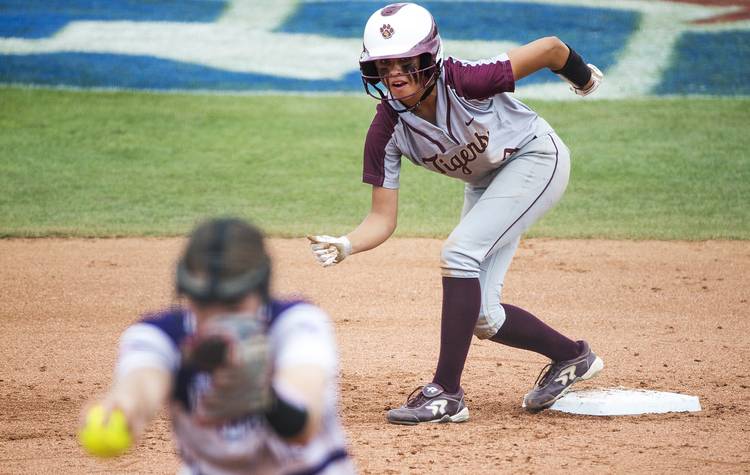 Dripping Springs second baseman Camille Corona looks on during a Class 5A semifinal match against Willis at McCombs Field on June 2, 2017. Corona has signed with Texas. NICK WAGNER/AMERICAN-STATESMAN

Three of UT’s four signees became Texas pledges after Mike White was hired to lead the team this summer. In fact, Birdville pitcher Grace Green originally gave a verbal commitment to White while he was coaching at Oregon. Dripping Springs infielder Camille Corona, though, committed to the Longhorns almost two years ago while Connie Clark was the head coach.

Texas also signed catcher London Marder and utility player Alyssa Popelka. Popelka attends nearby Westwood, and White said she “possesses both middle infield and outfield ability, so she is a true utility player.” At Humble Atascocita, Marder was once a teammate of Texas junior outfielder Kaitlyn Washington.

“We’re excited to bring in our first Texas class as a coaching staff,” White said in a press release. “This group includes pitching, infield, outfield and hitting depth for our program. Overall, we’re very pleased with this class. It will help us as a complete unit, and we see them as being immediate contributors for our squad.”

SIGNED! Local product @CamilleCorona has signed her NLI to join the Texas softball family! We're so glad to have you joining our program! #HookEm #TexasFamily pic.twitter.com/QM8HAZiifo

SIGNED!! Pitcher @gracefacegreen has signed her NLI to join the Texas softball family! We're so happy to have you join us on the Forty Acres Grace! #TexasFamily #HookEm pic.twitter.com/cRMBvg52Ih

SIGNED!! Catcher-utility player @londonmarderrr has inked her NLI to join the Texas softball family! We've cornered the market on players from Humble as she joins @JanaeJefferson4 & @KaitlynBreann25 on the UT squad! #TexasFamily #HookEm pic.twitter.com/olGjm1jwbp

SIGNED!! Another local product is joining the Longhorns as infielder-utility player @alyssapopelka has inked her NLI to join the Texas softball family! So glad to have you Alyssa! #TexasFamily #HookEm pic.twitter.com/uURbxM6TiO