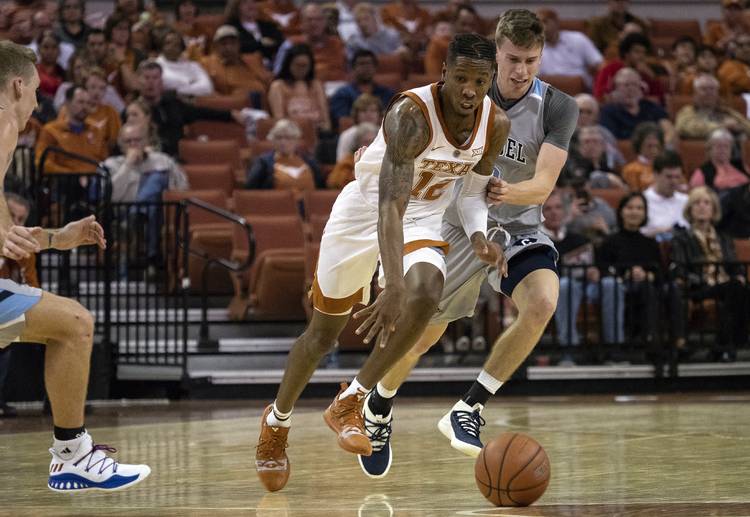 In all four games this season, Texas has looked good at times and dreadful at others. You simply don’t know whether these Longhorns will be hot, cold, somewhere between the two or stuck permanently on one side or the other.

The throttle was stuck on the cold side in the first half, then it went hot and trended that way for the rest of the night as Texas ran away from the Citadel to win 97-69.

If you solely looked at the final numbers, the Longhorns (4-0) must’ve had an easy time of it. They shot 41 percent from the floor and had five players in double figures. But it took a while to get things going.

Dylan Osetkowski had 15 points and 11 rebounds. Courtney Ramey hit three 3-pointers and tallied up 13 points. Jase Febres and Jaxson Hayes both added 12 each. The Citadel (2-2) was known for its 3-point shooting, but the Bulldogs made just nine of 32 from downtown against the Horns.

This wasn’t necessarily his best game at Texas, nor even his best this month. But Kerwin Roach II became the 37th player in Texas basketball history to score more than 1,000 career points on Friday against the Citadel. He finished with 15 points on 5-of-13 shooting and had a “SportsCenter” worthy dunk that was vintage “Snoop.” All three of his 3-pointers in the second half helped Texas run away with it. The Horns had a 29-point lead with 3:24 remaining.

These Longhorns can’t shoot. Texas started the game 3-for-12 overall and 0-for-8 from 3-point range. At least the defense started well. A full-court press rattled Citadel early, resulting in a jump ball and a timeout. With ice-cold outside shooting, Texas went inside. Hayes went right to the rim with a one-handed dunk. Osetkowski also faked a 3-pointer, stepped closer and drilled a 10-footer. Nobody had any luck beyond the arc. Texas was 2-for-19 in the first half from 3-point range.

These Longhorns can shoot. Febres got himself and his season going in the first nine minutes of the second half with four 3-pointers, three from the left corner, as Texas jumped out to a 68-43 lead. Ramey got into the act with three 3-pointers himself as Texas started the second half 6-for-9 from downtown. They were throwing it in from everywhere. And Hayes came out of nowhere for a high-flying alley-oop jam from Hayes to give Texas a 75-48 lead with 7:27 remaining.

When Eli Mitrou-Long is on the court, things happen. He’s had a positive impact in the three previous games so far this season. Against Arkansas, Texas was plus-12 in Mitrou-Long’s 24 minutes on the floor. He was at it again against the Citadel.

Mitrou-Long hit UT’s first 3-pointer of the game with 11:10 left in the first half to help ignite a 21-3 run that stretched across 5 minutes, 30 seconds. Then, he deftly executed an impressive fake behind-the-back pass that led to another layup.

In just six minutes with Mitrou-Long on the floor, Texas was plus-16. He also drew a charge later in the first half with the Horns leading by nine.

The last time Texas met North Carolina, Javan Felix buried a game-winning 18-footer on Dec. 12, 2015, in coach Shaka Smart’s first season in Austin. It was possibly the best overall game of Felix’s career as he finished with 25 points. Felix is long gone, but the Horns and Tar Heels will meet again on Thanksgiving in the Las Vegas Invitational. Tipoff is 6:30 p.m.