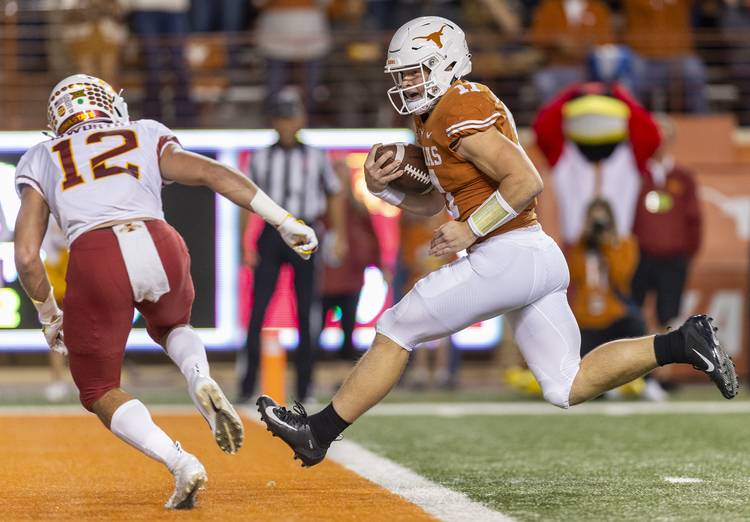 Texas quarterback Sam Ehlinger (11) scores a touchdown past Iowa State defensive back Greg Eisworth (12) in the first half of a Big 12 Conference football game at Royal-Memorial Stadium, Saturday, Nov. 17, 2018. [Stephen Spillman for Statesman]

It’s halftime at Royal-Memorial Stadium. Fifteenth-ranked Texas, its path to the Big 12 championship game within reach, is leading No. 16 Iowa State 17-3.

One of the biggest roars of the night came before kickoff and before the Senior Night ceremony honoring the team’s final home games for 26 seniors. It was the end of the West Virginia-Oklahoma State game in Stillwater, which was being shown on the giant screen. The Cowboys’ 45-41 win tagged West Virginia with its second Big 12 loss, right along with Texas and Iowa State, and the Mountaineers get Oklahoma next week.

But for that result in Stillwater to really matter, the Longhorns have to take care of business tonight. And so far, they are.

Davante Davis is being thrown at. A lot. He’s been drawing primary coverage duties of Butler.

1. Anthony Wheeler looks like he’s taking his final home game seriously. He had two tackles on Iowa State’s opening drive, including a sack on third-and-9 to force a punt.

2. Collin Johnson left little doubts on his knee early. He had a high-pointed 35-yard catch on the sideline and a 13-yarder on the first drive.

3. Caden Sterns had a sack. The Cyclones still ended up with points on the drive (a field goal), but seeing Sterns active early was a positive sign. He’s had a couple of cool weeks since he was named a Thorpe Award semifinalist last month.

1. Chris Brown — Sterns’ backup — made the defensive play of the first half when he scooped a tipped pass off Landon Akers’ hands on a third-and-long. It was reviewed and held up, giving the Longhorns the ball at the Cyclones’ 36-yard line and already leading 14-3.

The great field position went for naught, however. The Horns couldn’t capitalize on the short field with points.

2. Speaking of which, Cameron Dicker missed a 28-yard field goal that would’ve given Texas a 17-3 lead with 5:53 left in the half.

3. Watson’s 39-yard run late in the quarter was Texas’ longest run of the season.

With Sam Ehlinger (shoulder) ailing, Texas turns to Shane Buechele as second half kicks off against Iowa State