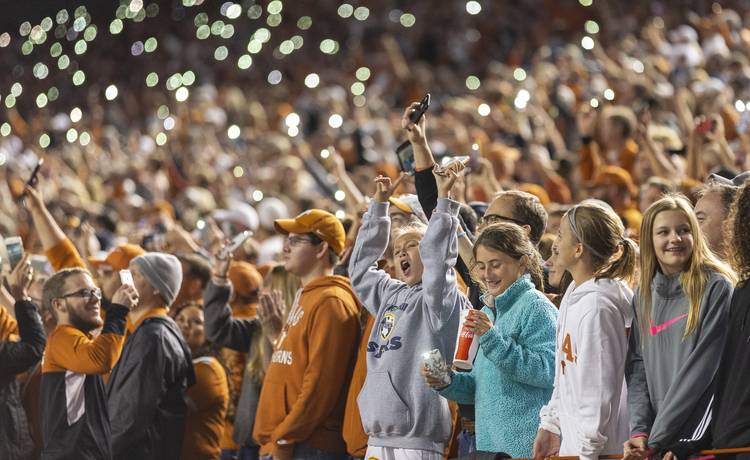 The 500th Texas Longhorns game to be played in Royal-Memorial Stadium provided plenty of highlights for the home team. But no moment was more Instagram-worthy than a crowd singalong to Journey’s 1981 hit “Don’t Stop Believin’ ” illuminated by thousands of waving cell phone flashlights.

Loving the score but this “Don’t Stop Believing” karaoke moment we all had during commercial break made my whole night. #hookem pic.twitter.com/eAo5DgsOlr

As American-Statesman reporter Brian Davis put in his story for Hookem.com:

During a fourth-quarter timeout, school officials cranked up some Journey. The song “Don’t Stop Believin’” is a universal favorite. Fans held up their cellphone flashlights and sang along, stamping an unforgettable moment on the 500th game in the stadium’s history.  “That was organic,” said athletic director Chris Del Conte, who shared the game’s final moments with Gov. Greg Abbott. “That was incredible,” tight end Andrew Beck said. He nudged Collin Johnson, a fellow senior, to look  around and take it all in. “All of a sudden, coach was like, all right lets go. And I’m jogging out and I tap Shane and said, ‘Hey man, what’s the play?’ I don’t even know what we’re supposed to be doing.”

Here are a few more views, although none of them quite do the moment justice:

Texas Longhorns may have won the football game, but the real winner tonight was Journey. An entire stadium singing along to “Don’t Stop Believing” and shining their phone lights was epic. The audio on this clip does it no justice. pic.twitter.com/28zzsExNBS

Amazing game last night. Great weather, great parking, great company, great game. One of the highlights was when the PA system played Journey’s Don’t Stop Believing and cell phones lit up all over the stadium and everyone was singing along! #dontstopbelieving #gohorns #amazingnight

Even the players got in on the act.

“Don’t Stop Believin’!” Here is how it looked from our perspective. An incredible moment provided by the fans at DKR. #ThisIsTexas #HookEm pic.twitter.com/jy10hMQuvZ

Alas — though it all was a first at DKR and seemed spontaneous enough — it wasn’t exactly original. Mississippi State has played “Don’t Stop Believin’ ” at the start of the fourth quarter for a couple of years.

I saw that Texas did the Don’t Stop Believing thing last night and honestly, if you can believe it, I’m a bit perturbed by that. I heard another school has been doing it for years… pic.twitter.com/rqNO3s9KCI

Texas rises up to No. 11 in AP Top 25 poll as Les Miles joins Kansas