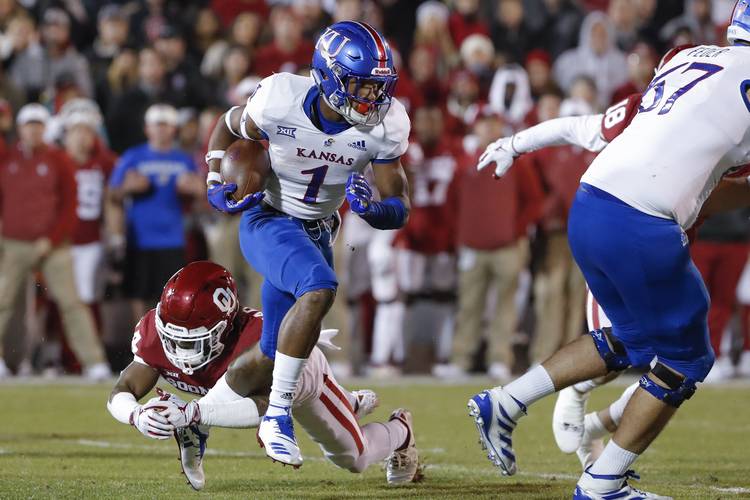 Kansas running back Pooka Williams Jr., (1) runs against Oklahoma during the first half of an NCAA college football game between Kansas and Oklahoma in Norman, Okla., on Nov. 17, 2018. (AP Photo/Alonzo Adams)

During its upcoming trip to Kansas, Texas will be hosted by one of the top newcomers in the Big 12.

Kansas freshman running back Pooka Williams, Jr., was named the Big 12’s newcomer of the week on Monday. It was the fourth time that Williams has won that award this season. Three-time honoree Brock Purdy, the Iowa State quarterback who was held to 119 yards of total offense by Texas this past week, is the only other player to be named the conference’s top newcomer more than twice.

In this past weekend’s 55-40 loss at Oklahoma, the 5-10, 170-pound Williams ran for 252 yards and two touchdowns on only 15 carries. Those 252 yards are a freshman-class record at Kansas. He also threw for a touchdown, totaled 42 yards on two kickoff returns and added 18 receiving yards to his stat line.

A four-star prospect from New Orleans, Williams has rushed for 1,022 yards this season. He is the Big 12’s second-leading rusher. Williams’ average of 154.5 all-purpose yards per game ranks fifth nationally.

At his weekly press conference on Monday, Texas coach Tom Herman said that Williams is “one of the best players in the league.” At 136.5 yards per game, Texas boasts the NCAA’s 37th-best rushing defense. The last Jayhawk who topped 100 rushing yards against Texas was James Sims, who had 176 yards in 2012.