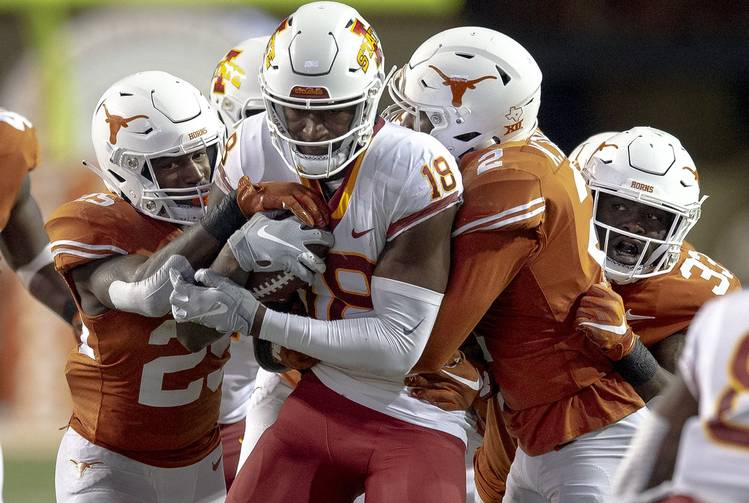 This late in the season, the unofficial guide to coaching says you should ease up on the players. Most practices in November are shorter as players wear just helmets, shoulder pads and shorts.

Texas went full pads and had a full day of tackling last Tuesday in preparation for Iowa State. They did it again Monday, two days after the 11th game of the season and heading into the biggest game of the year.

“I think it’s kind of getting back to our roots a little bit,” tight end Andrew Beck said. “Midseason we kind of got away from it, and coaches sat down last week and thought it would be a good idea to get back to what we know works.”

If Texas (8-3, 6-2 Big 12) beats Kansas on Friday, the Longhorns will clinch a spot in the Big 12 championship game. If the Horns lose, they need Oklahoma and Iowa State both to win this week and force a three-way tiebreaker scenario that favors UT.

“Injury wise, obviously pretty banged up but nothing too serious,” Herman said Monday.

Several UT players said they loved the energy level on Monday. Going full pads last week led to a terrific defensive performance against the Cyclones. Beck is hoping that repeats itself this week against the Jayhawks.

“I think a lot of guys were worried about how we were going to feel because we played a late game Saturday and came back to practice Sunday and go full pads on Monday was kind of nervous,” Beck said. “Bodies felt better than we thought they were going to.”

Beck said loved what the Horns are doing and supported the decision. Then, he joked, “I  know they don’t care whether I support it or not, we’re going to. That’s always nice.”

Longhorns in the NFL: Week 11 sets stage for Colt McCoy start on Thanksgiving