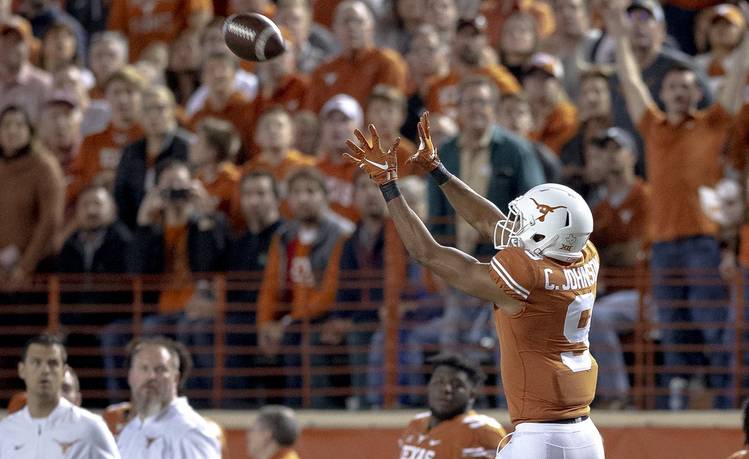 After missing one game with a knee injury, Texas receiver Collin Johnson said he was excited to get back on the field last Saturday against Iowa State.

The Longhorns wasted no time putting him to work. The 6-foot-6 Johnson ran a go route and caught a 35-yard pass on UT’s second offensive play. He also had a 13-yard catch three plays later to spark a scoring drive in a 24-10 win.

Johnson said he suffered the knee injury in a non-contact moment during practice. His absence against the Red Raiders forced the Horns to shift Lil’Jordan Humphrey to the outside receiver position and Jerrod Heard played the slot. Johnson declined to say if he would need offseason surgery.

Johnson finished with three catches for 55 yards against the Cyclones. He’s now got 730 receiving yards and five touchdown catches this season.

“I felt pretty good out there and just happy to be out there and contribute to my team,” Johnson said. “At this point, everyone’s battling through some bumps or bruises or injuries. I love my team so much, it’s the least I could do to put my body on the line for my teammates.”

Johnson and Humphrey were both asked again Tuesday about their NFL plays. Both players sidestepped the question and said they would have to talk about it with their families.