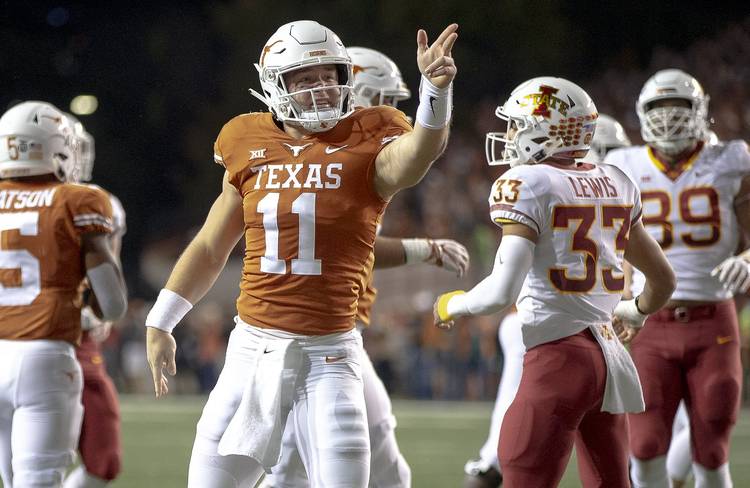 Texas quarterback Sam Ehlinger went through a full workout on Wednesday and coach Tom Herman expects the sophomore to play against Kansas.

Ehlinger aggravated his shoulder injury in last Saturday’s game against Iowa State while running for the end zone. An Iowa State defender lowered his shoulder and hit Ehlinger square on what was a sprained AC joint.

Ehlinger left the game and did not return after halftime. However, he was on the sideline throwing hard passes trying to get back in the game. Asked Tuesday if the injury was not as severe, UT offense coordinator Tim Beck said, “I’d say that’s fair.”

Ehlinger did not throw during Monday’s practice. He participated some on Tuesday and increased his workload to 40 live throws on Wednesday, according to UT.

In a statement, Herman said he expected Ehlinger to play. However on Monday, the coach said that if Ehlinger was cleared medically, he had earned the right to start.

Herman was asked why not start backup Shane Buechele and save Ehlinger for possibly the Big 12 title game.

“Because we’re going to play the best players, the players that give us the best chance to win, regardless of opponent,” Herman said. “He’s proven that he can win really big ball games for us and perform that way, and we’re going to need our best to win.”

Buechele was 10-for-10 passing and led the Longhorns to a 24-10 win over the Cyclones last weekend. He’s played in two games this season, and coaches were hoping to redshirt him. By NCAA rule, players who redshirt cannot play in more than four games.

Preview: Texas vs. No. 7 North Carolina