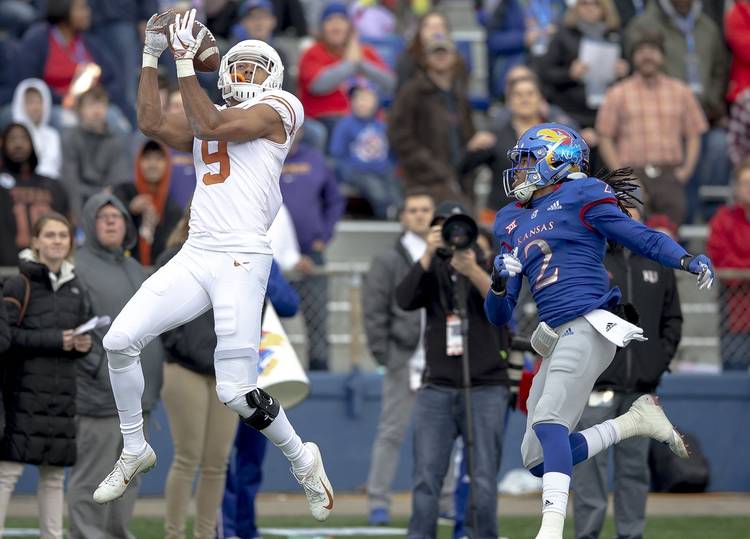 In some ways, this game isn’t that close. The Longhorns’ defense has been impressive and Kansas has been unable to do anything offensively. But in reality, it’s a one-score game and that has to be making a lot of fans nervous. Memorial Stadium has a lot of empty seats in it and the energy is low. Sam Ehlinger has looked spotty, the offense has been stuck with horrible field position and if it wasn’t for a solid day so far for the Texas defense, this halftime feeling of guarded optimism could be a different thing altogether.

This should be a 14-0 game. Or at least 10-0. But with 4 minutes left in the half, Sam Ehlinger threw his first interception since the end of the season opener, and it killed a golden scoring opportunity for the Longhorns.

Jayhawks linebacker Najee Stevens-McKenzie picked Ehlinger off at Kansas’ 12-yard line. It snapped Ehlinger’s school- and Big 12-record string of consecutive passes without an interception at 308 passes. Two plays before the pick, Ehlinger missed a wide-open Andrew Beck up the middle for what would’ve been a 20-yard touchdown.

That could loom large later in the game.

But the defense has looked good all day. Kansas’ top three offensive weapons all are having pretty quiet games — quarterback Peyton Bender is 5 of 10 for 28 yards, running back Pooka Williams has 10 carries for 31 yards, and wide receiver Steven Sims Jr. has 3 catches for 3 yards.

Ehlinger has been up and down. After missing the second half last week against Iowa State with an aggravation of his shoulder injury, the sophomore has made some plays again with his arm and legs. He took a hard tackle on Texas second drive as he was driven to the turf on his shoulder. But he didn’t look fazed.

Ehlinger is 9 of 16 for 94 yards, with a touchdown and an interception. He’s had three notable misfires, including one that would’ve been a touchdown. He has three carries for 12 yards.

The Longhorns are playing without Gary Johnson, who’s been suspended for today’s game. Texas is relying on Anthony Wheeler and Jeffrey McCulloch in his place.

This is David Beaty’s final game at Kansas. The next time we see the Jayhawks, they’ll be coached by Les Miles.

The Longhorns started their first three drives at their own 2, 4 and 8. It’s been a nice day for Kansas punter Kyle Thompson, who’s having Michael Dicksonesque placement today.

1. It was fitting that the first play of the game was a 2-yard loss on a run by Pooka Williams, who’s coming off a 252-yard night against Oklahoma. And it was even more fitting that the tackle was made by Brandon Jones, who’s missed the last few games with a bad ankle.

In the 2015, 2016 and 2017 Texas-Kansas matchups, the Longhorns struck quickly — very quickly. We’re talking an 84-yard touchdown catch by John Burt on Texas’ first play in 2015, a 75-yard touchdown play by Jacorey Warrick on the first play of the game in 2016, and a 49-yard touchdown pass to Lorenzo Joe after the Horns recovered KU’s game-opening onside kick.

It took Texas one drive, not one play, this year. And that’s just fine. The 11-play, 98-yard drive was the longest of the season so far and it included runs from Tre Watson, good protection from the line and a steady hand from Ehlinger, who distributed passes to Lil’Jordan Humphrey and Devin Duvernay and Collin Johnson, who caught the touchdown to cap it off.

2. Good decision, bad result: Kansas punted after its first drive. D’Shawn Jamison — who has been hot and cold on punt returns this season, scoring on a long 94-yarder at Kansas State but also the victim of some bad fielding decisions — was situated at his own 14 and saw the ball bounce at the 18. He let it bounce over him as three Jayhawks were descending upon him. The ball bounced again at the 5, and then dribbled to a slow stop. It was downed at the 2.

Still, Jamison made the right call in not trying anything fancy there.

3. Good decision, bad result, part II: On Kansas’ next drive, the Jayhawks punted again. This time, Brandon Jones let it bounce over his head — and again, the Jayhawks downed it deep. The Horns started their second drive at the 4.

5. Brandon Jones had to be helped off the field in the second quarter. Fielding a punt, he took a big hit from KU’s Emmanuel Moore, a helmet-to-helmet play that was a personal foul that was reviewed for targeting. Jones went into the trainer’s tent for observation.

The targeting call was confirmed by the review. Moore, a freshman from Justin Northwest, was ejected. He’ll miss the Jayhawks’ season opener in 2019.

Texas will get the ball to start the second half. The Longhorns won the coin toss for the eighth time in 12 games and deferred. The defense held for the second straight week and forced an opening-drive punt.

Looks like Kansas starts ’em young on the Horns Down

LOOK: Kansas campus gets a Texas makeover for game day