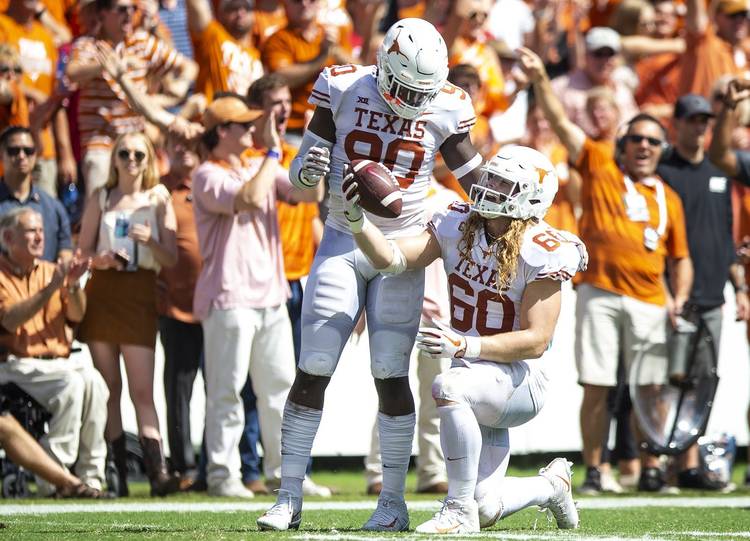 In case anyone’s wondering, Texas defensive end Breckyn Hager — who calls himself “a young prophet,” one unafraid to proclaim that “OU sucks” — was not made available to reporters on Tuesday.

That’s probably for the best considering Hager was reprimanded by the Big 12 office the last time he spoke up about Oklahoma. Hager, who is every bit as passionate about UT as one can imagine, has vowed to cut his long blonde hair on the trophy stage if Texas wins the Big 12 title.

There were other Longhorns to fill the trash-talking void about the Texas-OU matchup, though. At least, they spoke in politically correct terms and skirted the line for what constitutes trash talk these days.

“It’s gonna be a dirty game,” defensive tackle Chris Nelson said. “It’s gonna be a dogfight. But I love it, man. You’ll probably going to see hitting after the whistle. You’re probably see a lot of stuff if you have your eyes open for it. But that’s what we came here for.”

Receiver Lil’Jordan Humphrey heard at least one Sooner say “the funniest thing I’ve ever heard” when the two teams met on Oct. 6. “That I’m soft,” Humphrey said, cracking himself up in the process.

“He was just saying that trying to get in his head,” Nelson said. “I don’t think (the OU player) believes that. I would never call LJ soft. That man, he’s a grown man against boys, honestly.”

Quarterback Sam Ehlinger was asked repeatedly about the Sooners, a team he grew up despising. He never took the bait.

“There’s a lot of things you can’t do that you could do back in the day,” Ehlinger said. “That goes with every facet of life. There’s a lot more attention and more criticism on literally everything. I think it’s just the way the world’s evolved.”

‘Are you serious?’: Longhorns laugh at Sooners asking Big 12 about doing the Horns Down

Quack Attack: Texas adds another transfer from Oregon ahead of 2019 softball season