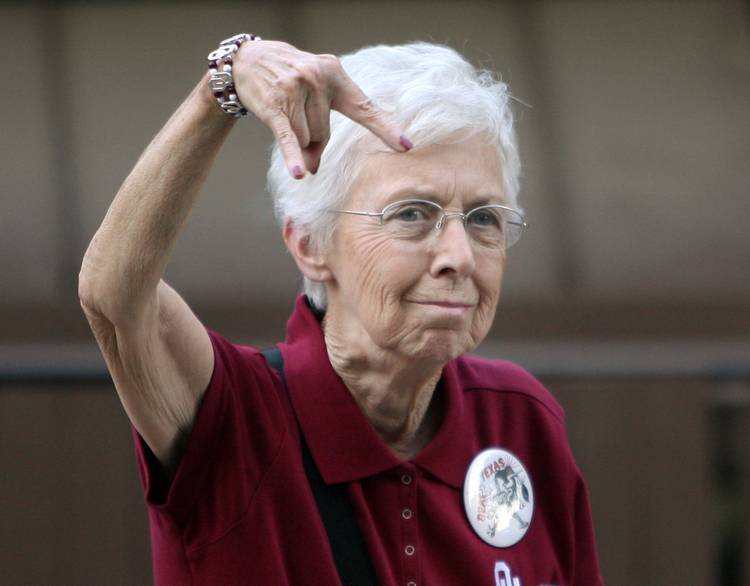 Dody Johnston of Clairemore, Oklahoma, flashes an upside down horns to a group of UT fans at the West End in Dallas on Friday Oct. 5, 2007. JAY JANNER/American-Statesman

Texas players were slightly amused when told on Tuesday that Oklahoma coach Lincoln Riley would ask the Big 12 conference if the “Horns Down” hand gesture would be permitted on Saturday.

Two West Virginia players were flagged 15 yards for unsportsmanlike conduct for doing the Horns Down against Texas. Oklahoma fans do it all day long whenever the Sooners play the Longhorns.

For OU, doing an upside-down “Hook ’em” hand sign is practically a rite of passage.

“We’re working on some clarification but I will make sure it’s fully clear to our guys what they can and can’t do,” Riley told Oklahoma reporters on Monday.

Texas defensive end Charles Omenihu, who did a home-run swing after sack against OU at the Cotton Bowl, could barely contain his laughter.

“Are you serious?,” Omenihu said. “I ain’t too worried about that.”

When asked what UT coaches told him he could or couldn’t do at AT&T Stadium, Omenihu said, “Nothing really. My coaches saw me swing my imaginary bat. I told y’all when I swung it was 450 feet. I’m going to try and hit Jerry’s big TV up there.”

No Breckyn Hager appearance, but Longhorns still expecting a dogfight vs. Sooners