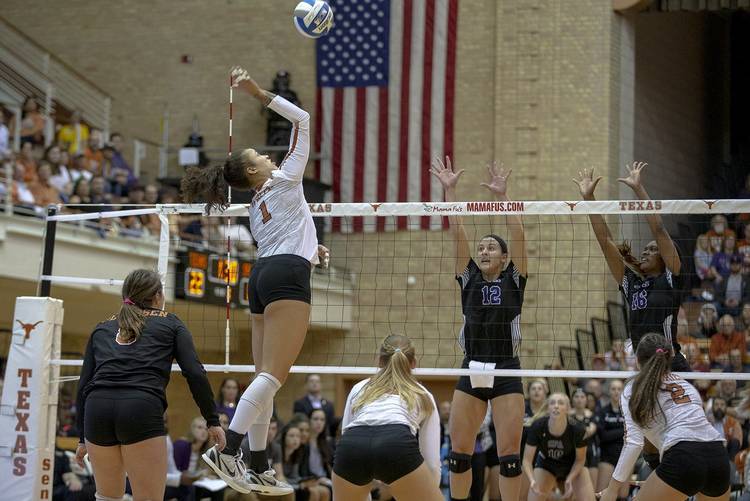 Texas outside hitter Micaya White (1) elevates to spike the ball against Stephen F. Austin in Austin on Nov. 29, 2018. [NICK WAGNER/AMERICAN-STATESMAN]

Texas junior Micaya White was named the Southwest Region Player of the Year by the American Volleyball Coaches Association on Tuesday.

This season, White leads Texas with her 3.87 kills per set. Ahead of this weekend’s regional tournament at BYU, White is also hitting .306 while averaging 2.41 digs per set. One week ago, White was named the Big 12’s Player of the Year.

Next up on the postseason’s roll-out of awards are the AVCA’s All-American honors, which will be announced next Tuesday. White was a first-team All-American as a freshman and a third-team honoree last year. No Longhorn has ever been named the AVCA’s Division I Player of the Year.

White vs. The World

Ahead of the NCAA Tournament's third round, how does Texas junior Micaya White stack up against the AVCA's other regional MVPs?

Read more: Times announced for BYU-based regional as Texas looks to advance to the Final Four

Longhorns in the NFL: Colt McCoy fractures leg on Monday night in Week 13