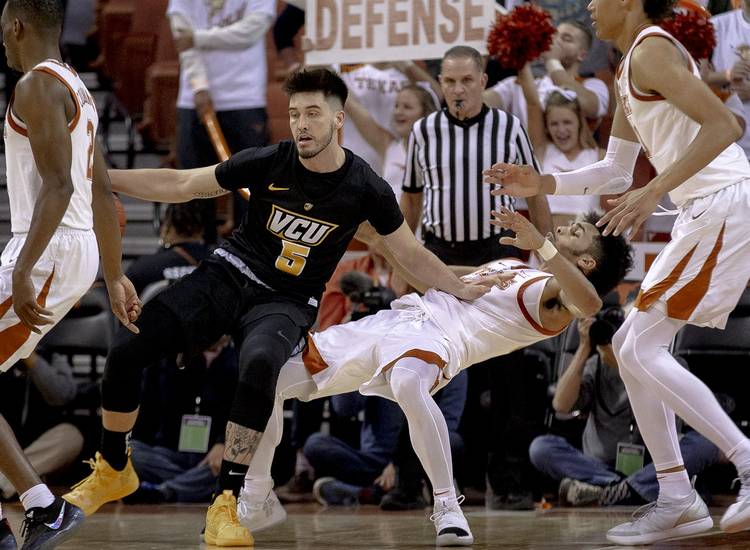 That thunderous ovation you heard Wednesday night at the Erwin Center had an unmistakable ring to Texas coach Shaka Smart.

Matt Coleman III missed a potential game-winning 3-pointer in the final seconds, and Virginia Commonwealth players stormed the court to celebrate a 54-53 road victory over the program’s former coach.

The closing minutes were just plain ugly for both teams.

After a timeout, Coleman threw a ball straight through Jaxson Hayes’ legs and it went sailing out of bounds. Hayes tried to sky over VCU’s Marcus Santos-Silva and was called for a charge. Hayes later tried to rifle a pass across the court and it was easily intercepted.

The Longhorns got back within one when Kerwin Roach II scored his first bucket of the night on a leaning runner with 1:29 left.

Texas drew up a play to give freshman Courtney Ramey a chance for a major shot. But his 3-pointer with 40 seconds left missed the mark, and the Rams went the other way. Instead of getting a potential game-clinching bucket, De’Riante Jenkins missed a 10-footer and Texas got it back.

The final play wasn’t a bad one; Coleman just missed the shot from the top of the key.

Good things are going to happen with Jericho Sims gets involved early and often. And if the guard can keep feeding him the ball in the low post, there could be all sorts of action. Sims threw down a vicious two-handed dunk and then followed that with a nifty bucket down low to give Texas a 41-40 lead. He finished with 14 points on 7-of-9 shooting along with six rebounds.

For a team that had too much “stubbornness” against Radford, to use Smart’s word, Texas was more active in looking for mid-range shots against VCU. Instead of settling for 3-point attempts, the Horns got the ball inside for close-range shots.

Dylan Osetkowski took a pass from the left corner and backed his man all the way into the paint. Now, he missed the shot, but there was a clear emphasis on getting closer.

Roach had an awful night. He was 0-for-10 at one point, but at least six of those shots were mid-range jumpers instead of ill-advised threes. This was after he went 2-for-12 last Friday against Radford.

Sometimes, Texas’ basketball IQ is lacking. VCU called timeout with 29.5 seconds left in the first half, and Smart used that time to set up the inbound play. But Sims turned it over, and the Rams had the ball again. Then, Coleman fouled Marcus Evans even though the Rams were in the double bonus. Evans hit both free throws as VCU took a 32-31 halftime lead.

UT’s first fast-break points didn’t come until early in the second half when Jase Febres threw down a dunk off a run-out sparked by a turnover on the other end.

Texas’ six-game home-stand continue Sunday against Purdue. The Boilermakers will be the toughest home non-conference game of the year, or at least they were supposed to be on paper when the schedule was released. Coach Matt Painter’s club ranks 14th nationally, according to Ken Pomeroy’s analytical website rankings. However, Purdue (5-3) has lost three of its last four games going into Thursday’s Big Ten matchup against Maryland.

On Second Thought Ep: 120 AJC’s Mark Bradley answers: Will Georgia be down in Sugar Bowl vs underdog Texas?