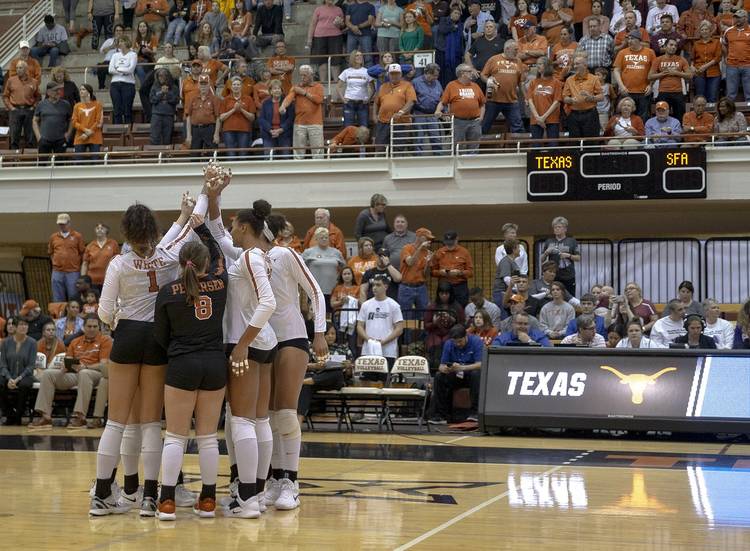 The defeat ends UT’s season in a regional final for a second straight year. The Longhorns had reached the Final Four in five straight seasons from 2012-16. BYU (31-1) will instead join Illinois, Nebraska and Stanford in next week’s Minneapolis-hosted Final Four.

Texas was the first team to 20 points in Saturday’s opening set, but a kill from setter Lyndie Haddock-Eppich and two points by Jones-Perry spurred the Cougars’ closing run. After Texas fought off three set points in the second session, Jones-Perry’s kill closed out a set that featured a 19-19 tie. The Longhorns lost a 21-20 lead in the final frame as BYU ended the match with a 5-0 run.

Boasting .317 and .313 percentages, BYU and Texas entered their showdown as the two top-hitting teams in the nation. The Cougars hit .241 on 112 swings, although the 6-foot Jones-Perry finished with 25 kills and a .367 hitting percentage. Texas hit .222 as a team.

Texas ends its 2018 season with a 23-5 record. The Longhorns were led by freshman Logan Eggleston, whose 15 kills gave her double-digit snipes in each of the four matches in her first postseason. Eggleston was joined on the Provo Regional’s all-tournament team by teammates Brionne Butler and Micaya White.

Yaazie Bedart-Ghani had seven kills and eight blocks while Morgan Johnson contributed seven blocks in their last matches as Longhorns. Bedart-Ghani and Johnson are the only seniors on the Texas roster. The Longhorns started four freshmen throughout the NCAA Tournament and White, a junior, was the Big 12’s Player of the Year this fall. Redshirting middle blocker Asjia O’Neal was the nation’s second-ranked recruit in 2018, and UT’s 2019 recruiting class is made up of outside hitter Skylar Fields and middle blocker Molly Phillips.

Murray or Tua? How our four Heisman Trophy voters cast their ballots — and why