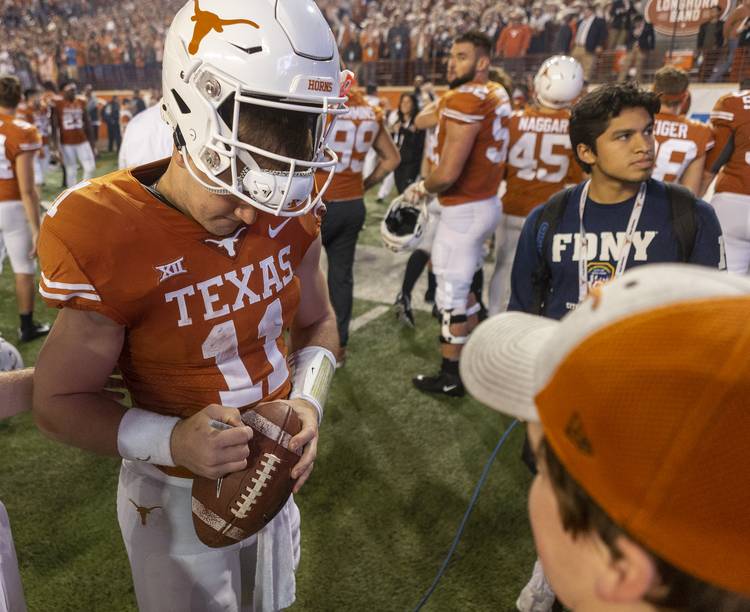 When asked two weeks ago about Sam Ehlinger, Texas defensive tackle Chris Nelson stated that “his name should be brought up in that (Heisman conversation).”

Alas, Ehlinger was not a factor in the voting for this year’s Heisman Trophy. None of the top-10 finishers on the Heisman Trophy’s ballot were Longhorns. The oddsmakers, however, have their eyes on UT’s quarterback for next season.

While forecasting the 2019 Heisman Trophy race, the MyBookie Sportsbook gambling website had Ehlinger with 8/1 odds on Saturday. He was a +900 bet two days later. Those most-recent odds are the seventh-best among the perceived contenders for the 2019 award. Alabama quarterback Tua Tagovailoa, who was the runner-up for this year’s Heisman Trophy, is listed as the favorite.

Texas can only claim two Heisman Trophy winners in its history. It has been 20 years since Ricky Williams won college football’s most-coveted trophy. Texas last had a Heisman Trophy finalist on its roster in 2009.

During a sophomore season that still has the Sugar Bowl on its schedule, Ehlinger has thrown for 3,123 yards and 25 touchdowns. Both of those single-season marks rank sixth in UT’s history books. Ehlinger also set a Big 12 record this fall when he threw 308 straight passes without an interception. His 13 rushing touchdowns rank fourth among the nation’s quarterbacks.

if Ehlinger were to win the Heisman Trophy in 2019, it would continue a trend. Of the last seven quarterbacks to win the award, four — Baylor’s Robert Griffin III (Copperas Cove), Texas A&M’s Johnny Manziel (Kerrville Tivy), Oklahoma’s Baker Mayfield (Lake Travis) and Oklahoma’s Kyler Murray (Allen)— went to a high school in Texas. Ehlinger, of course, is a member of nearby Westlake High’s 2017 graduating class.