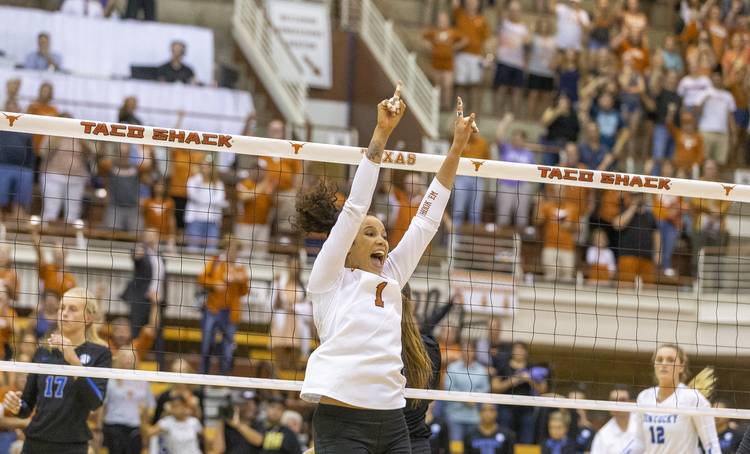 Texas outside hitter Micaya White (1) celebrates the final point of a 3-1 win over Kentucky at Gregory Gym on Sept. 7, 2018. (Stephen Spillman / for American-Statesman)

For the third time in her collegiate career, Texas volleyball player Micaya White can call herself an All-American.

White was given a second-team designation on the American Volleyball Coaches Association’s All-American team on Wednesday. A junior outside hitter, White was the member of UT’s volleyball program to land on one of the AVCA’s All-American teams. Seniors Yaazie Bedart-Ghani and Morgan Johnson and freshmen Logan Eggleston and Brionne Butler were all honorable mentions.

This is the third time that White has earned All-American accolades. She was a first-team honoree as a freshman and a third-team pick in 2017. Demetria Sance, Haley Eckerman and Chiaka Ogbogu are the lone Longhorns to earn a spot on an AVCA All-American team during all four of their seasons, which is a feat that White will aim for next year.

White led Texas this year with her 3.87 kills per set. White posted a career-best .301 hitting percentage, and the six-rotation player also averaged 2.42 digs per set. The Big 12 recognized White as its Player of the Year and she was named the top player in the AVCA’s Southwest region.

This past weekend, Texas (23-5) has its 2018 season ended by BYU in the fourth round of the NCAA tournament.