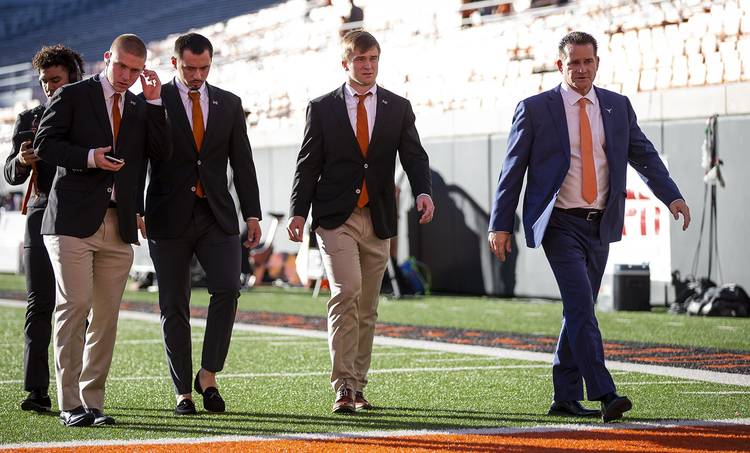 When it comes to quarterbacks, Texas may soon have one fewer name on its depth chart.

The Football Brainiacs and 247Sports first reported on Saturday that Texas freshman Cameron Rising has entered the NCAA’s transfer portal. Having one’s name in the transfer portal does not guarantee a departure. It does allow for communication with other programs and gives athletes a chance to explore their options. Georgia back-up quarterback Justin Fields, for example, is reportedly in the portal but he will join the Bulldogs in the Sugar Bowl.

A UT source has confirmed to the American-Statesman that Rising is still practicing with the Longhorns. Like Fields, he is expected to be available for the Sugar Bowl.

Once an Oklahoma commit, the 6-2, 230-pound Rising was rated as a four-star prospect when he joined UT’s 2018 recruiting class. Rising has served as the third-string quarterback at Texas for much of this season. He has yet to play in a collegiate game.

Regardless of whether Rising stays or leaves, there will be a logjam at the quarterback position in 2019. Sam Ehlinger, who has started in UT’s last 13 games, is only a sophomore. Shane Buechele would have two years of eligibility remaining if he uses a redshirt this season, and freshman Casey Thompson has not appeared a game. On Wednesday, Texas announced the signing of four-star quarterback Roschon Johnson.

When asked this week about his surplus of quarterbacks, Texas coach Tom Herman said he expected to have all five quarterbacks on the roster this spring.

UPDATE (9:25 p.m.): Texas confirmed to the American-Statesman on Saturday evening that Thompson’s name has also been placed in the NCAA’s transfer portal. That news was first reported by 247Sports. Like Rising, Thompson was a four-star recruit in high school. This fall, he has mostly run UT’s scout team.

Texas is confirming that QB Casey Thompson’s name now appears in the NCAA transfer database, same as QB Cam Rising. Both still with the team, expected to go to Sugar Bowl, for now.

Shooting woes return for Texas in loss to Providence