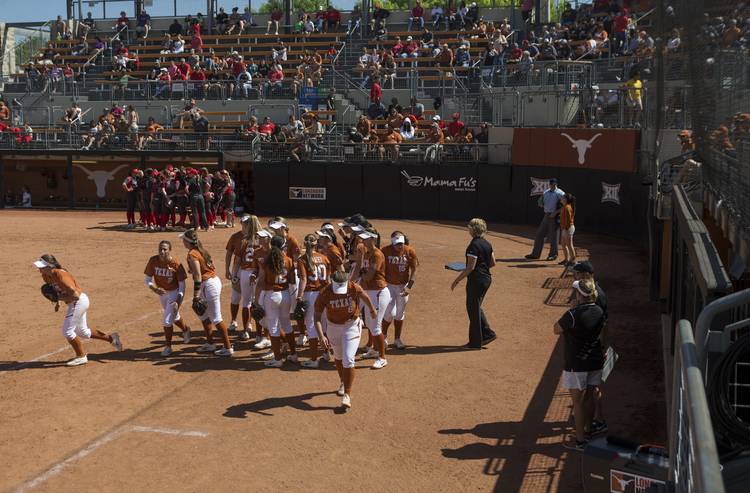 Texas takes on Houston during a NCAA softball game at McCombs Field on April 2, 2017. (Stephen Spillman / for AMERICAN-STATESMAN)

This offseason, the Texas softball program has proven that birds of a feather do indeed flock together.

Oregon catcher Mary Iakopo announced on Friday that she will transfer to Texas. The news was confirmed a day later by UT’s softball team. Texas expects Iakopo to be eligible for this upcoming season, which opens on Feb. 8 with a home game against Northwestern State.

Iakopo becomes be the fourth player to join the UT softball team this offseason after a transfer from Oregon. Two month ago, pitcher Miranda Elish and utility player Lauren Burke proclaimed they’d be heading to Austin. Ex-Duck outfielder Shannon Rhodes joined the program in November. Texas hired head coach Mike White away from Oregon this past summer, and he brought two of his assistant coaches with him.

Oregon went 53-10 during a 2018 season that ended in the Women’s College World Series.

Iakopo will be a sophomore this spring. During her freshman year, Iakopo hit .306 with 37 RBIs and eight home runs (no player at Texas had more than five HRs or 30 RBIs). Iakopo and UT infielder Janae Jefferson were among the 25 candidates for the NFCA’s Division I National Freshman of the Year award, which was won by Oklahoma’s Jocelyn Alo.

At Texas, Iakopo joins junior Taylor Ellsworth as the only catchers on the roster. Both Ellsworth and Iakopo earned all-conference honors as freshmen.

Texas, which went 33-26 last season, won’t be lacking in experience this upcoming spring. All four of the incoming Ducks were significant contributors at Oregon. Texas is also set to retain all-Big 12 pitcher Brooke Bolinger and seven players who earned 100 at-bats in 2018.

Justin Tucker does something no other NFL player has before