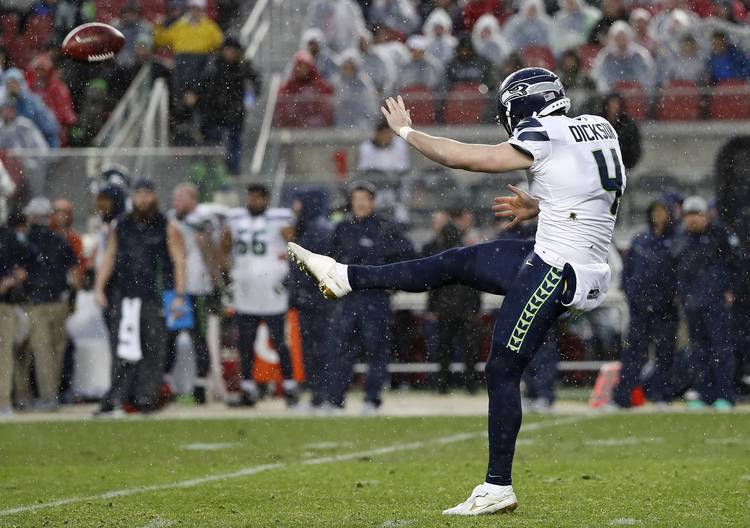 RENTON, Wash. — Considering how easily Michael Dickson has adjusted to the NFL and become one of the best punters in the league as a rookie, hearing that he was a bit anxious about a kicking situation may be a surprise.

But last Sunday night, the Seattle Seahawks rookie was on the verge of being asked to perform a task he’s never executed outside of messing around at practice or during pregame warmups.

The former Texas Longhorn was filled with apprehension at the prospect of having to attempt a drop-kick extra point or field goal. In a game. With a rush coming at him.

“We talked about it a little bit and I was freaking out a bit because we haven’t really I’ve never really hit a drop-kick field goal with the protection and everything,” Dickson said. “We kind of worked on that (this week) and got used to it. Feel a little bit more comfortable now with that, but really only hit them messing around in warmups and doing my kickoffs.”

Dickson has turned into a kicking marvel during his rookie season with Seattle, more than justifying the fifth-round pick spent on the Australian by way of Texas. He’s a Pro Bowl selection. He’s been an NFC special teams player of the month. Until this past week he led the NFC in yards per punt, both gross and net. His variety of punting styles whether trying for hang time, directional kicks, or pinning opponents inside the 20 has made him a weapon and a boost to Seattle’s defense.

And he provided one of the more shocking moments of the season when he ran out of his own end zone on a fake punt for a 9-yard gain and a first down late in Seattle’s win at Detroit in October.

But even Dickson was a bit unsure of what was going to happen last week after kicker Sebastian Janikowski was injured getting roughed on a field goal attempt. Dickson stepped in and used a drop kick on a pair of kickoffs which he had done in a couple of circumstances during the season but the idea of trying to drop-kick one through the uprights was daunting.

As it turned out, Janikowski wasn’t seriously injured and Dickson wasn’t needed to try a field goal.

“That was always the thing if something happened I was going to have to go in and do it but we never really … we’ve done it before but not to the depth of where I feel comfortable being back there,” Dickson said. “It’s hard to get backup reps as a backup kicker. Definitely going to work on it more the next couple of weeks and through the offseason work on it more, trying to get my operation down.”

Dickson started working on drop kicks while at Texas just for fun. He’s continued to practice it with Seattle.

But last week’s scare has ramped up the need to have a plan should it ever be needed in a game. Dickson said the biggest issue is figuring out how far back to stand to receive the snap while taking into account the time needed to get a proper drop on the ball and get the kick away. Dickson estimates he’s been able to hit from 60 yards in the past, but that’s without a rush.

“I’m kind of messing around with the idea of doing a punt depth just because it would give me a little more time to spin the laces and get the laces right,” Dickson said. “It’s a slower get-off time because you have to drop it and wait for it to bounce and then kick it. We’re trying to see what works best.”

For his part, Seattle coach Pete Carroll said he’ll be quick to turn to Dickson if needed, whether for his unique kickoffs or a field-goal attempt.

“We’ve got a lot of things that he can do that if we need him, he can jump in. I really wouldn’t hesitate. … It’s pretty exciting. He’s an exciting weapon for us,” Carroll said.