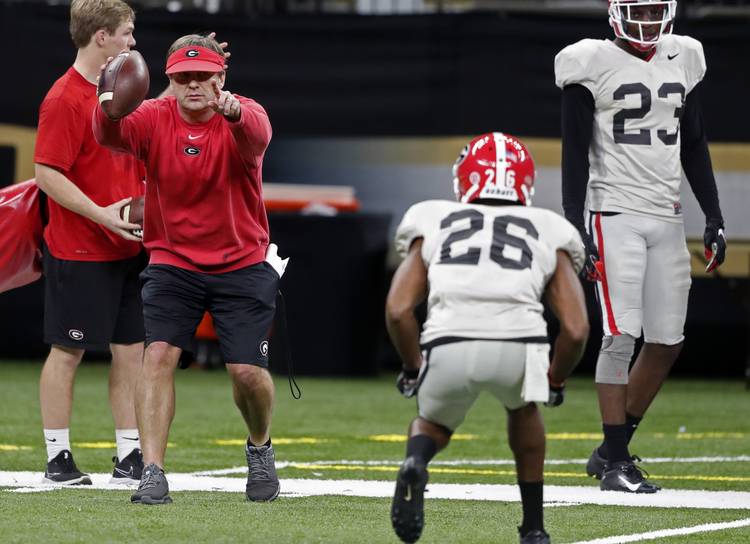 Georgia head coach Kirby Smart runs a drill as defensive back Tyrique McGhee (26) lines up at the Superdome in New Orleans on Dec. 28, 2018. Georgia will face Texas in the Sugar Bowl on Jan. 1, 2019. (AP Photo/Gerald Herbert)

NEW ORLEANS — Defensive back J.R. Reed tore up his knee as a high school senior in Frisco, and suddenly schools backed away. “SMU recruited me,” Reed said Saturday. Nobody from Texas, though, and certainly not the Longhorns.

Reed ended up at Tulsa, where he played 13 games in 2015 and got stronger. It simply wasn’t good enough. Fans like to criticize players for transferring, but what about players who believe they can do better at a bigger stage?

In 2016, Georgia coaches were recruiting Reed’s cousin, defensive back Deangelo Gibbs, and learned about Reed. The Bulldogs took a chance, and Reed rewarded the coaching staff with two solid seasons. He’s got 137 tackles in 28 career starts with one season of eligibility remaining.

Reed’s father, Jake, played 12 seasons in the NFL with Minnesota and New Orleans. Now, there’s some talk in Georgia circles about whether Reed will soon be an NFL prospect himself.

“Bet on yourself, believe in yourself and go out there and do something about it,” Reed said.

Using sign language, Texas captain Andrew Beck has a memorable moment ahead of the Sugar Bowl