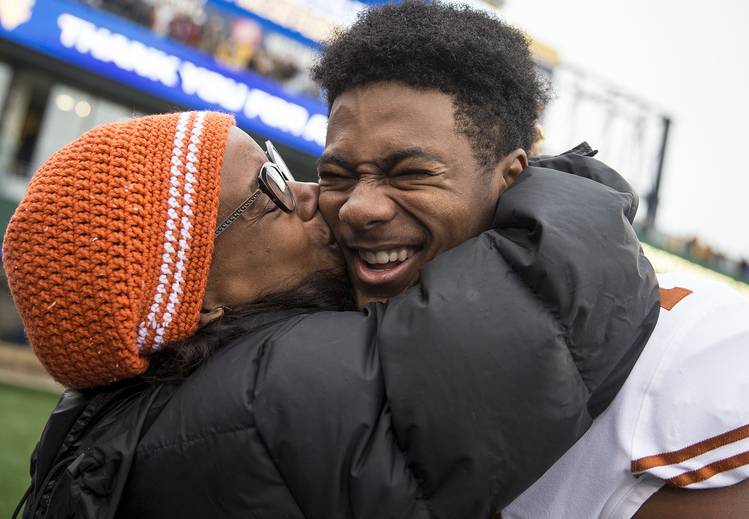 NEW ORLEANS — Senior John Burt has created highlights at Texas as both a receiver on the football team and a hurdler for the school’s track and field program. That, though, may not be the reason why his face is so familiar to Longhorn fans.

During UT’s football games, Burt has developed an unintentional knack for appearing in postgame photos. In the American-Statesman’s archives alone, there are around 20 photos of Burt reacting to wins and losses since the start of the 2015 season. For example, the American-Statesman caught Burt celebrating in the Cotton Bowl stands after Texas beat Oklahoma in October and receiving a kiss on the cheek from his aunt after last year’s win at West Virginia.

The UT receivers have noticed the camera’s love for Burt. Joked junior Collin Johnson on Saturday: “We always make fun of John in the receiver room about (how) he somehow always finds a way to be on the front page of a newspaper or a magazine or on our pictures around the facility. We always mess with him, like how do you do that? He’s just like ‘Man, I don’t even mean to. The camera follows me or something like that.’ We just mess around with him. His personality, it’s just great to be around. It’s kind of contagious. He’s a fun teammate to have.”

Burt has appeared in four games and caught one football this year. Taking advantage of a new NCAA rule, Texas will use a redshirt on Burt for this season. In order for that redshirt plan to work, Burt can’t play in the upcoming Sugar Bowl. He still traveled to New Orleans and practiced with the team at the Superdome on Saturday.

Using sign language, Texas captain Andrew Beck has a memorable moment ahead of the Sugar Bowl